“God Loves Us, Rich or Poor” 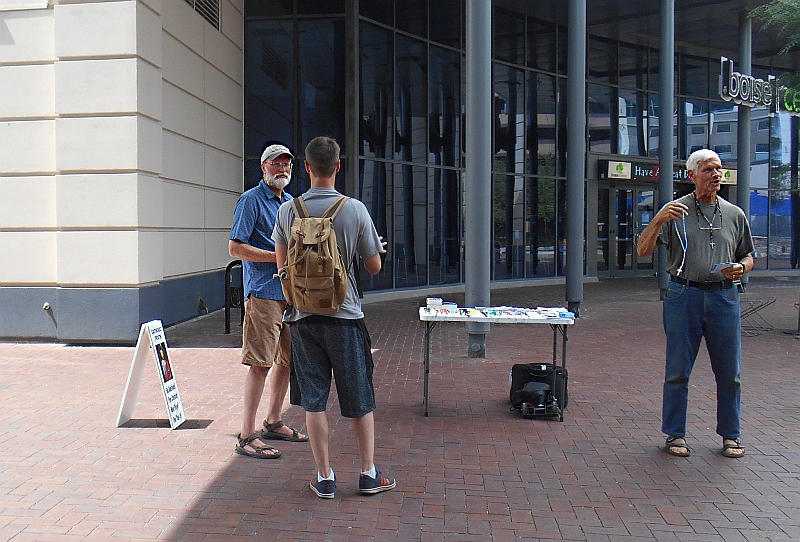 Two evangelists made it out on Sunday to evangelize, and as we were setting up we noticed a homeless man was sleeping in the corner near us. Another homeless man woke him, then crossed the park to a picnic table. The first man got up, accepted a rosary and its pamphlet from us, then went to join the other man. They sat at the table, and we continued to offer rosaries. Near the end of the session, the second man came back over and requested a rosary for himself. He had just had a biopsy (the results to have come a couple of days later) and asked us to pray. May the Lord’s will be done, and may He grant salvation!
“James”, a repeat visitor from many years ago, came and stayed awhile. He was glad to see us again. He had lost his rosary, but tried to remember the Hail Mary. I helped him with it, then let him have another rosary and its pamphlet. Unfortunately, James didn’t seem exactly sober, and nearly frightened a family away when they wanted a rosary for their 4-year-old girl. The dad brought the girl to our table anyway, and she received her rosary, but the family didn’t linger. James then moved closer to the center of the square, rolled out his sleeping bag, and tried to sleep. Toward the end of the session, a few drops of rain fell, and James, now more subdued, gathered his stuff and moved on.

One of our last remembered encounters was a man who stopped and was wearing a shirt displaying non-Christian symbols. He knew Christ, though, and became interested when Chuck described the Rosary’s focus on Him. Then he asked, “Do you guys have any food vouchers?” I encouraged him, saying if he wanted his luck to change for the better, he should sit down and learn the Rosary.