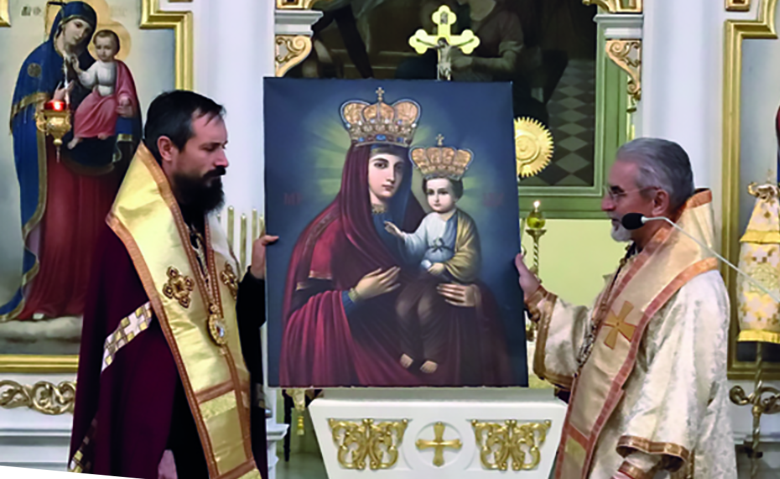 This past week we launched our urban missionary work at St. Stephen’s coinciding with receiving the Miraculous Icon of Our Lady of Klokocov for its 350th Anniversary! It’s been a great success so far, and the pilgrim icon will be visiting all five of the Byzantine Catholic parishes in the greater Detroit area. I’ve been working on getting support from the pastors to build teams for each parish and get into the neighborhoods of each parish to invite locals to come to the various Liturgical events.

On Tuesday Fr. Deacon Lawrence, Mr. Dan Lauffer and I reached many of our neighbors (knocking on doors) who were almost all (minus one self-proclaimed atheist – from whom we took down his address for Fr. John to visit as he loves talking with atheists) receptive and thankful for the visit. We also had a couple Providential encounters with people driving by who were likewise very enthusiastic (one person was lost needing directions and said she was going to stop by the Church, and the other was a Catholic who took some flyers to be a fellow missionary and give to the local Baptist pastor).

We preceded the missionary outing with the Prayer Rule of the Theotokos in front of the Icon (along with many prayers in days prior to this, and I took your advice and have the Byzantine Carmelites, Byzantine Franciscans & Benedictines from my hometown who have a monk leading the Byzantine Catholic mission in Omaha – all praying for us) and concluded with Divine Liturgy to which Fr. John offered up in the Prothesis (each particle of the bread to become the Eucharist is cut in preparation with prayer intentions for the stated names) for Divine Liturgy.