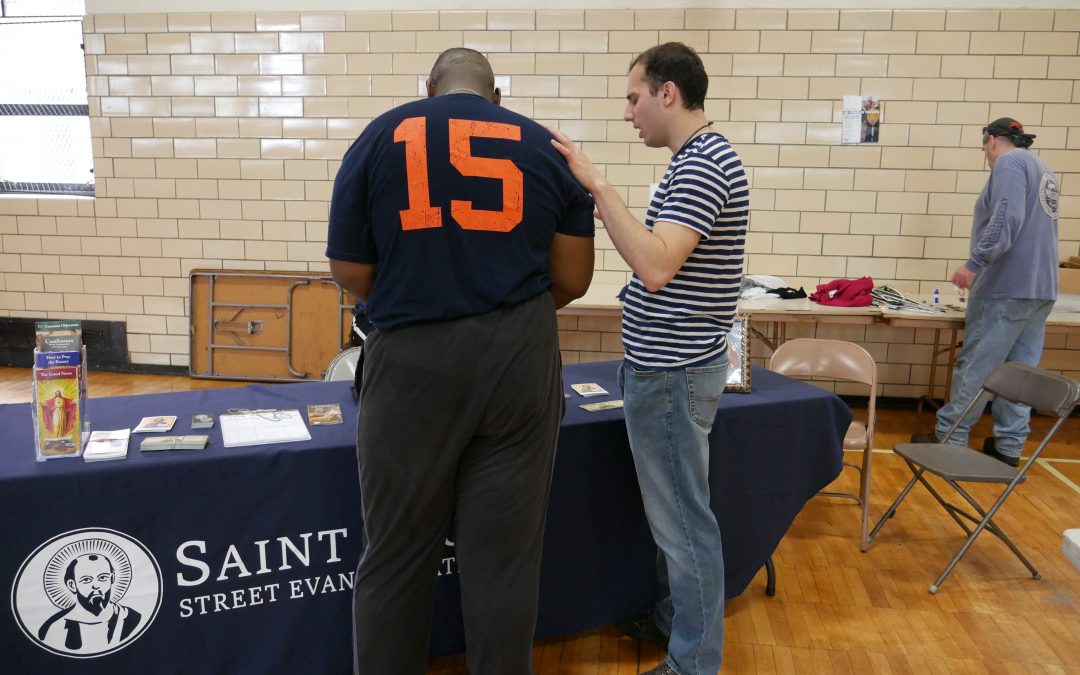 Click here to learn more about our Society of Evangelists
It’s critical that we pray before every evangelization outing. Without God’s presence and help, our efforts will be fruitless. This was proven true in today’s story.

The following report comes to us from evangelist Br. John with our Society of Evangelists in Warren, MI:

Our team set up at the Matchan soup kitchen, but for 10-15 minutes no one came over. We couldn’t figure out why, until we realized that we forgot to pray. So we stopped and prayed God would send someone to the table who was on the fence, and only 2 minutes after a man came over and said he noticed us but felt kind of on the fence about it. During prayer, Anne had asked for St. Monica’s intercession (patron saint of alcoholism). The gentleman that had come over said something nudged him to visit us and he wanted prayer to break his addiction to alcohol. I asked if he was doing the battle with Jesus or on his own, and he said “on his own”. I told him that’s who you need to do to beat this…Jesus! When asked about church he said he was away for a long time because he felt unworthy. We first shared a testimony of a friend who was miraculously healed of alcoholism then prayed with him. We prayed that God would help find him a place where he would be accepted and not looked upon because he is a child of God and Jesus is his brother and Lord. He joyously received a Miraculous Medal, rosary, and was instructed how to pray it for the graces he needs. He felt encouraged, filled with joy, and strong as a warrior after prayer. He believed that Jesus was now going to break into his life and do what he couldn’t do on his own.

Later on, a man received a medal, rosary, and prayer for healing of his pain in his side and spine from a car accident. He felt better and at first was only able to lean over to touch his thighs but after a second and third prayer felt even better and was able to touch his toes. Many others came by to receive rosaries, pamphlets, medals, and prayer. Some people didn’t come to the table but said thank you and blessed us. As we opened in prayer (albeit late) and song, we closed in prayer and song, praising and thanking God for his goodness to us that day.