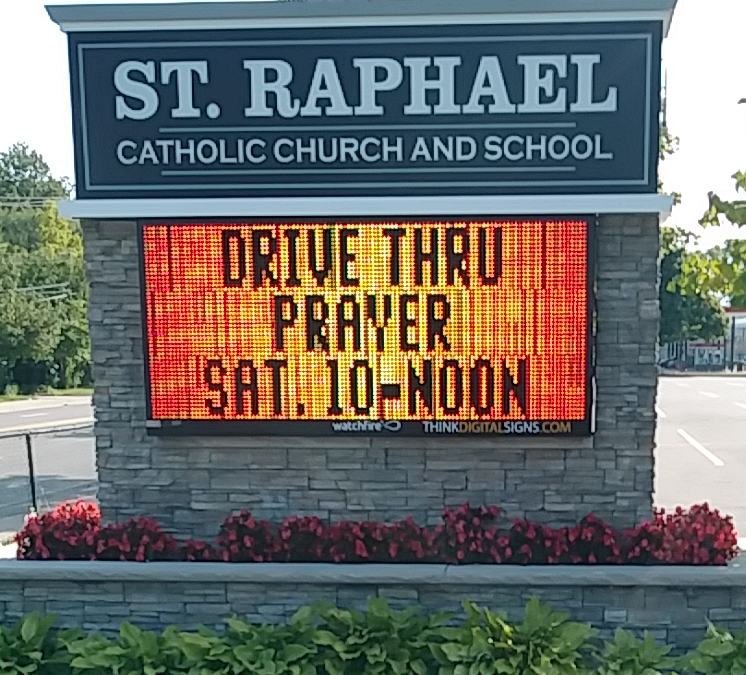 We were very happy with our first Drive-Thru prayer station last Saturday. Phil and Peggy set up at the north entrance of the church, while Sharon and the literature table was closer to the sidewalk. While Sharon was setting up the literature table, Phil prayed with a pedestrian who walked across the small front lawn to request prayer. After a long dry spell (and after Peggy had to leave), we had several people in quick succession.
Dani requested prayers for a dispute she is having with a neighbor, for her health and also for her daughter, whose birthday is today. Noticing Dani crossed herself when we prayed for her, we inquired if she is Catholic. Replying she is, we gave her a Miraculous Medal/prayer card and an Our Lady of Guadalupe medal/prayer card. She mentioned she attends a nearby parish, but occasionally came to our Adoration Chapel before it shut down. We explained the chapel has reopened but only for committed adorers. We gave her a recent church bulletin with information regarding signing up and noted that Sharon is one of adoration chapel co-ordinators.

Pedro, who attends Mass at St. Raphael, stopped by when he saw the literature table. A native of Mexico, Pedro was looking for a brochure on how to pray the Rosary in English. He went away with a Rosary brochure and St. Michael medal/prayer card. We also prayed for his family in Mexico. Amy, also a parishioner, stopped by for prayers regarding a finger she recently broke. We also spoke with a young teen who was walking on the sidewalk. When he asked if he had a prayer intention for us, he couldn’t think of anything. Sharon offered that we could pray for a successful school year, and so we did. Finally, a father and his two sons who attend the parish school stopped. One son chose a guardian angel medal/prayer card, the other chose a St. Michael medal/prayer card.