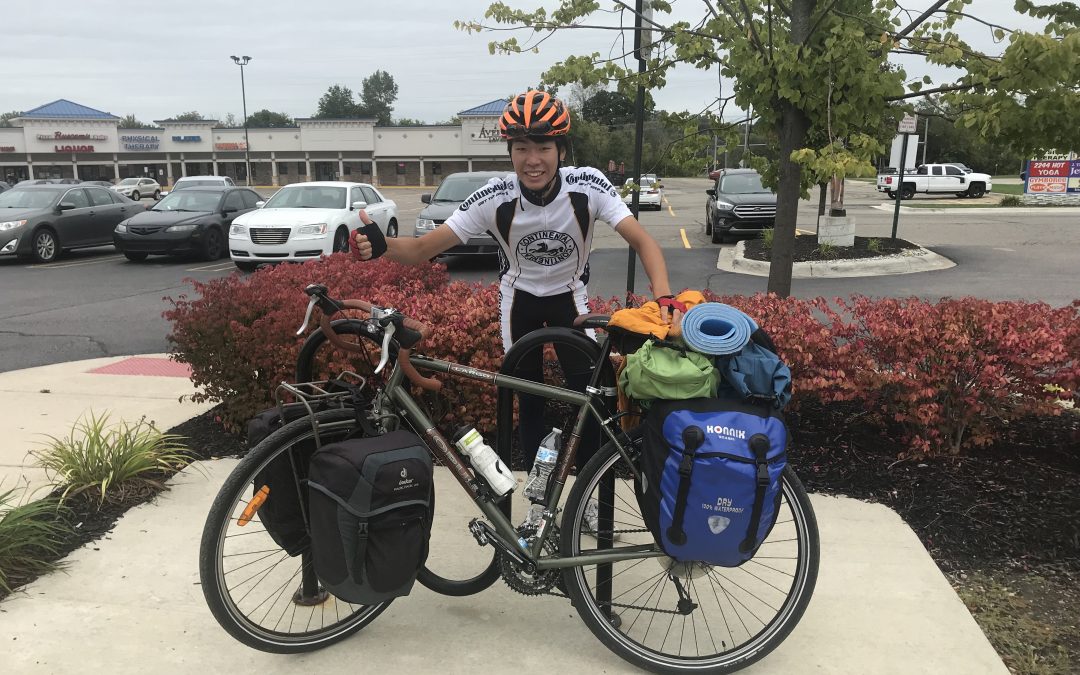 I was walking on our Rails-to-Trails path and encountered this wonderful young man from Japan with a bike that was packed!! I immediately commented on all the gear he had mentioned that he must be going on a long journey. He nodded with a short response. I asked about it and found out that he was riding across America and put Michigan on his path so he could “cut through” Canada a bit and see Niagara Falls. He barely spoke English. I simply asked if I could pray for him and his journey. He said yes and bowed his head and I prayed a short prayer.

After prayer he seemed more open to conversation and that’s when I heard his story – he is a university student from Japan who was between semesters and wanted to see America. So he flew to California to ride his bicycle across the USA…by himself!! I also realized that he didn’t speak much English. I offered to buy him breakfast and we went to the nearby Tim Horton’s to finish the conversation. He told me about his family, and I asked what they thought about his trip. He said his sister thought it was exciting, but his Mom was a bit concerned (as mothers are). That set up the perfect opportunity to speak about the Blessed Mother so I jumped in and asked if he would like my Miraculous Medal.

The language barrier made the conversation rather difficult, but Google Translate helped. We spoke about God which was a new subject for him. It was interesting because he really was ignorant of the concept of faith, Christianity, or religion. But he was open to prayer right from the start. We exchanged contact info and he sent me a picture when he reached Niagara.

Praised be Jesus Christ! While we’re not sure what happened to the young man, he made it to NYC and we pray that he felt the Lord with him as he journeyed.