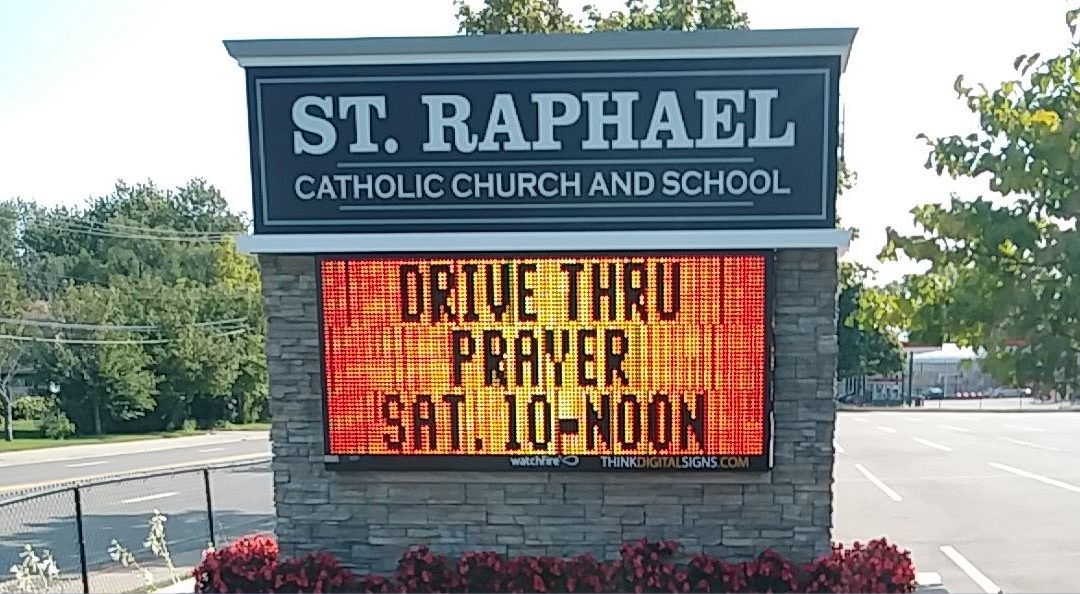 Today our team consisted of Peggy, Phil and Sharon. Phil and Peggy sat at the prayer station at the north entrance of the church, while Sharon sat at the literature/medal table closer to the sidewalk. While Sharon was setting up the table, Pedro, who stopped last month, came by to pick up another English language Rosary brochure. When Sharon and Phil were discussing a possible event later in the month, two young men walked by on the sidewalk. Phil asked if they had any prayer intentions and they requested that he pray for the world.

After 1.5 hours and no drive-thru customers, Phil picked up one of our lawn signs and walked up and down the sidewalk. While he was walking, a woman drove up and wanted prayers as her pet dog of 14 yrs had recently died. Sharon walked up to the prayer station as Phil hadn’t returned. The woman also requested prayers for her financial situation. Sharon noticed the woman made a sign of the cross when they began to pray. As Peggy remained talking to the woman, Sharon returned to the literature table for a Miraculous Medal. The woman gratefully accepted the medal and immediately put it on. As we were picking up, a woman asked for prayers for the end of abortion.

Peggy herself picked up a Miraculous Medal and several brochures to pass on a woman who previously spoke to Peggy about returning to the Catholic Church after experiencing a miracle. God is good and again brought us people who were thankful we were there. We are tentatively planning to set up the first Saturday in November, weather permitting.