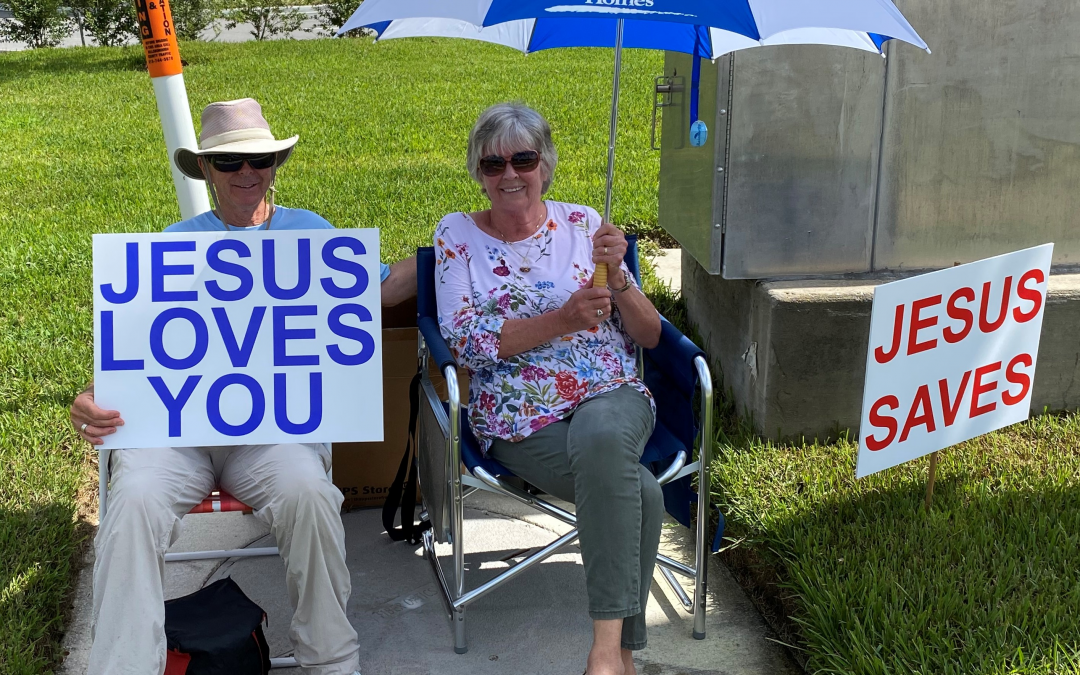 The COVID-19 numbers here in the Tampa Bay area still keep us from setting up a table for personal interaction, so once again we decided to show the love of Christ from a safe distance with our signage. This time we chose another section of Tampa – the intersection of N Dale Mabry and Fletcher. It was a bit hot, but we had a great turnout with four newbies: Peter, Julie, John & Kathy, and some regulars (Richard, Joe, Mike and I). The traffic moved at a greater rate of speed here than in our previous location, but we still had a fruitful experience.

We had a lot of horn toots and thumbs up. Our signs and attitude were all positive. We even helped out with a fender bender. As we waved our signage, we were approached by an ex-Catholic evangelical Christian. She was very surprised when she got the response to her question, “What church do you belong to?” I’m sure she expected the local mega-church, and the last thing she expected was “Saint anyone.” She was from “up north” I think NY, and told us she left the Church because there was no “spirit” in the parishes she tried. We informed her that was not the case here in the Tampa area as our group came from several parishes to which we all attested were filled with the Spirit. She then made charges against Pope Francis for allowing the possibility of atheists ever being saved. After trying to explain the teaching from Vatican II on the topic, with little success, I deflected the issue by pointing out we should concentrate on our salvation and not judge who will be damned.

At this point, due to the many Bible quotes she used on salvation, I went to John Chapter 6 where “unless you eat the flesh of the Son of Man and drink his blood, you do not have life within you.” I pointed out that this can only happen in a Catholic Mass. She was moved, I think she remembered, and she promised to “do more research” on the topic.