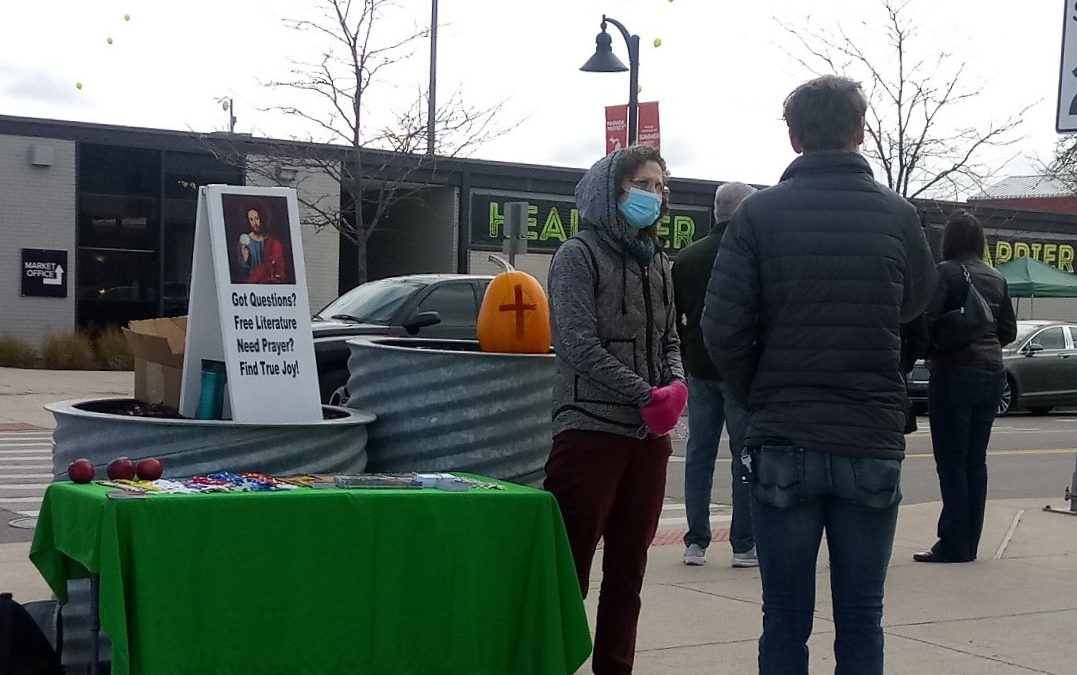 Michael and I did our weekly outing at Eastern Market on the morning of Halloween. Randy, the instructor at our local evangelization school, brought several of his students. It was the first time on the streets for most of the students but they were all fast learners.

Immediately after our opening prayer, a 60-something man slowly passed our table. He kept staring at our setup out of curiosity. I invited him to the table, saying that everything on the table is free of charge. He approached and I offered to pray with him for his intentions. He said that his father was Catholic and his mother was Baptist, so he was raised in a Baptist church. He admitted that he sometimes goes to a nearby Catholic parish. Fittingly, since Halloween is also Reformation Day, I talked about the Protestant Reformation. I spoke about how Christians worldwide were united until the Great Schism of 1054, then divided even further in 1472 and 1517. I told him that the apostolic churches, primarily the Roman Catholic Church, hold the authority of Jesus Christ. All other Christian churches were started at least 1,500 years later. He seemed very receptive and accepted almost everything I said. I invited him to take a closer look at the Catholic Church and he accepted a rosary, pamphlet, crucifix, medals, and holy cards before he left.

One of the students, Monica, was also conducting a survey (an assignment for a different class) and asking for the opinions of nonbelievers. Four people, including three fallen-away Catholics, were happy to talk to Monica and one of them received prayer for healing. Monica certainly has a strong understanding of the first part in our evangelization method: LISTEN, befriend, proclaim, invite, pray. We certainly pray that we planted seeds in all of our conservations that morning.