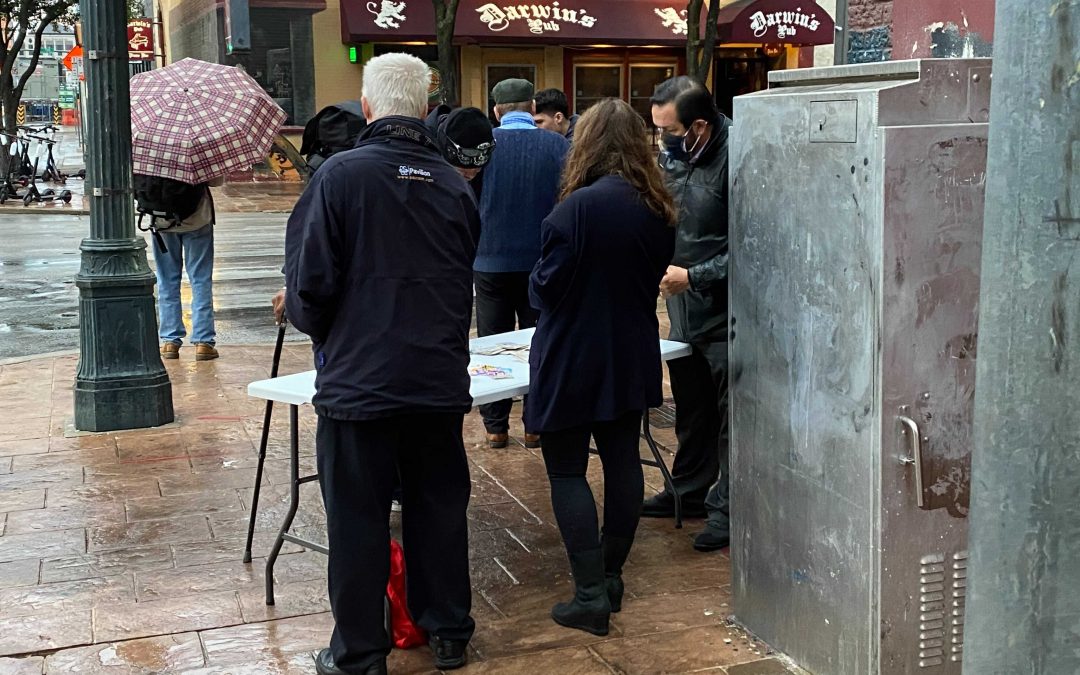 Austin, TX. To prepare their diaconate candidates, Deacon Guadalupe asked St. Paul Evangelization to come to Austin and train them how to evangelize. We had about 30 men and their wives show up. After Adam trained them on the basics, we hit the streets for an hour to share the good news. Today is the third part in the series of stories from that experience.

Click here to learn more about our Basic Evangelization Training
The following report comes to us from two students of our recent evangelization training in Austin, TX:

Our first evangelist had this experience to share: When Jesse was speaking with a homeless person, I spoke with a man named John in his tent. I asked him to introduce me to some of his neighbors. So he did. We walked around and introduced me, giving me some names and phone numbers. I hope to follow up with them. A couple of the guys I met, I probably served with in Afghanistan years ago. It was a wonderful opportunity.

Next, we heard from another evangelist with several powerful encounters:

We had a really fun time. Met some interesting people. Three of them in particular caught our attention. We had a guy that was walking by fast. We asked if he wanted a Miraculous Medal. He said no. We asked him what he needed. He said his daughter is in an institution on suicide watch, so we prayed for her. We met another lady, she was a security guard. She asked us to move our table a bit. She came back out and mentioned that she is Catholic and asked for a Rosary. We talked to her, and she told us her husband is going through a lot of demons. She also said she’s going to find a church. Pray for Clarissa’s family. Finally, we had a guy named Bobby who was yelling and screaming at us from across the street. He basically said every foul word you could think of at us. He came over and asked for money, so I gave him a couple of dollars and then listened to him. Darren came over and talked/listened to him too, and by the time we got done he said “Can I give you a prayer? Can I give you a hug?” All he wanted was someone to recognize him and let him know that he mattered.