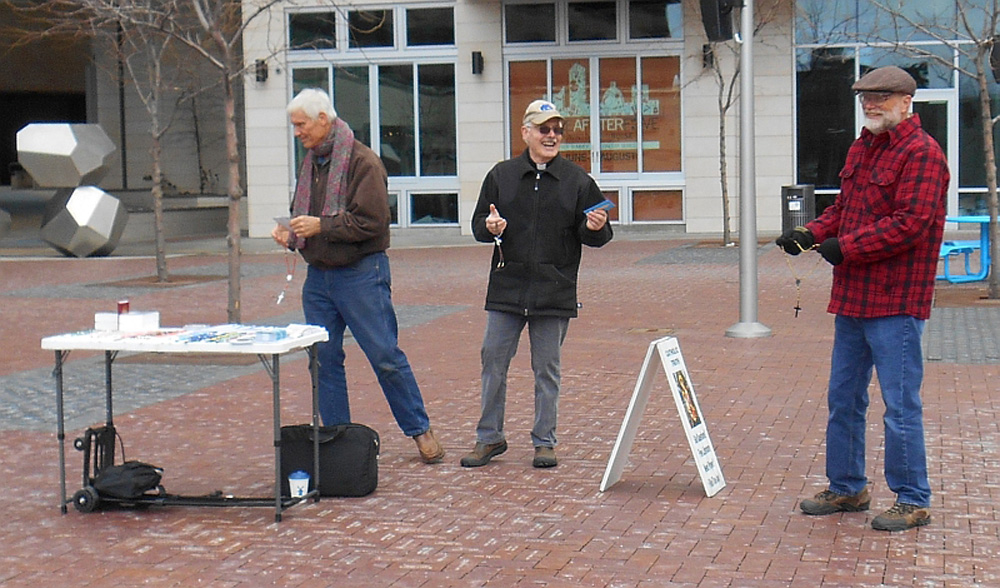 A plethora of evangelists came out. Two first-time evangelists joined us: “Connor” and “Todd”. Connor had driven about 100 miles from his new home east of here. He’s interested in starting a team there. People responded well to him. Todd has been following our “adventures” for a couple of years, giving us much-needed prayer support. He also donated several nice Rosaries, which had been gathering dust around the house. They found new homes quickly. Overall, foot traffic was light, but the four evangelists gave away 15 Rosaries and its pamphlet, as well as 1 kerygma pamphlet.

A tall youth in a ski suit bantered with us a couple of times. The first time, he and a companion stopped together. The friend enthusiastically received a Rosary, telling us he had been confirmed Catholic. The tall youth, though, proclaimed service to the enemy. The second time, he came alone, and mocked us by trivializing the gifts of conversion and Baptism. That young man is in a terrible place and really needs our prayers. Lord, have mercy!

Later an older Catholic man stopped. He lost his wife of 30 years just three months ago. To Chuck, he seemed evasive about whether he was going to Mass now. He wanted prayers for his son “Samuel”, who was going on his fourth tour of duty in an active war zone. Blessed are those who mourn.