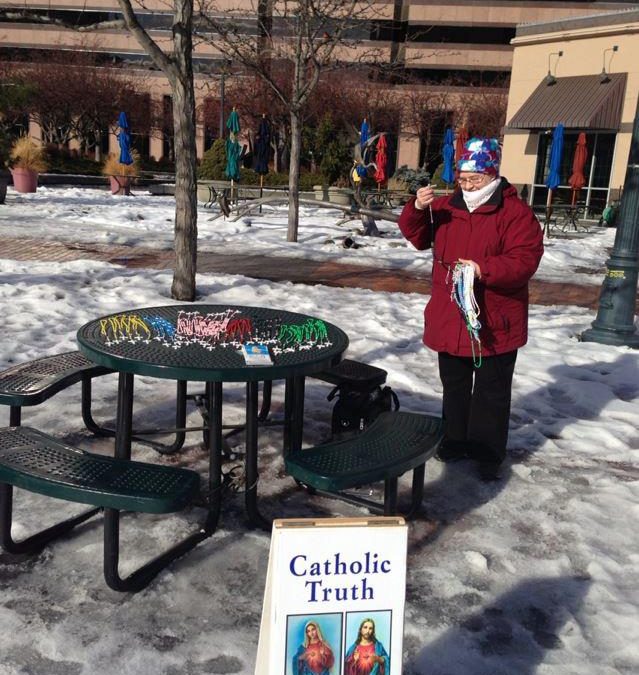 Two evangelists made it out to share the Gospel today. Altogether we gave away 10-15 Rosaries and the accompanying pamphlet. Here are a few of the encounters. First, one teen stopped with his much taller friend. After his friend jokingly accepted a Rosary, the young man told me that he was ready to get back to God. His best friend had died two years earlier, and he’d been battling depression. He was very glad to receive the Rosary and pamphlet on how to pray it. He’d been a member of a pseudo-Christian religion, but didn’t want to go back.

Next, two women stopped. One is the niece of a local priest who died a few years ago. Lucy told her that she not only remembered the priest, but also says a prayer by his graveside from time to time. The mention of that tiny act of charity seemed to affect our visitors in a more than a sentimental way, since they immediately began talking about how much they missed going to Mass, especially their elderly mother. Chuck let them know about the “parking lot” Mass at his parish, where they can stay safely in the car, but still attend and receive the Eucharist. Both women left happy.

Later on, as a young couple walked by, hand in hand, the woman broke free and came to our table. She asked, in smiling curiosity, “What is the Rosary all about?” She seemed open and interested in what Lucy was telling her. Meanwhile, Chuck talked to the man, who stood several feet off, wanted nothing to do with the Rosary, and barely wanted to talk about the weather. The woman did say that she’d been raised in a pseudo-Christian religion, but now “didn’t believe all that stuff”. We encouraged her to get closer to Jesus Christ by meditating on the Mysteries. Pray that she does.