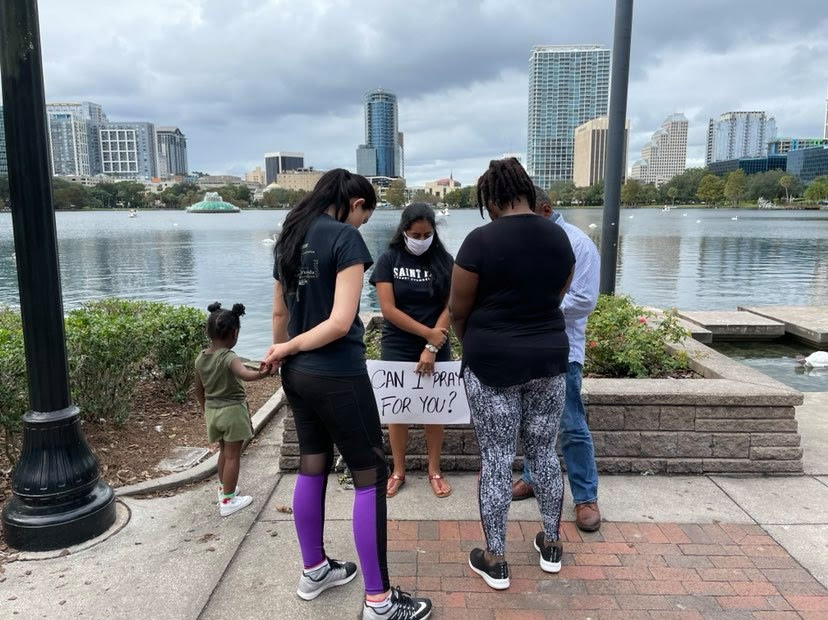 We found a lot of people out at the park this morning and there was an event going on involving the swans. We decided to set up next to the scene with our wagon and materials while someone held our prayer sign. A lot of people passed by, but the first half hour we were met with glazed stares. We continued to offer Rosaries and a man came close to us because his dog wanted to come up and sniff me. He apologized for his dog, and I offered him a Rosary. He said yes, asked if we were Catholic and then said ‘you know I’m really thinking of becoming Catholic.’ I was surprised that out of all the people ignoring us, he was the first person I got to talk to! He told me that he was considering becoming Catholic because his significant other was a Catholic and as a war veteran he saw how strong faith made men. I showed him a bit more about the Rosary and he started asking questions about how to pray. We also had one more book of Trent Horn’s “Why We’re Catholic” that I gave him along with my number so that we could get coffee sometime and talk more.

I took a turn holding the prayer sign up and met a few people walking by. The first was a woman with her two daughters who asked me if I was seriously taking prayer requests. I told her yes and we prayed together. We talked for a little bit and offered some Miraculous Medals to which they happily accepted before having to take off. One of the new members on the team got the courage to talk with a young man nearby who had a cast around his arm. He asked him if he had recently gone to the doctor for a medical reason, and the young man said yes. So our teammate told him guessed his condition and was correct. They had a conversation about healing, and he offered to pray for the young man. He ended up praying over him and giving him a rosary so that he could continue to pray.

One of the last persons we saw was a man who was helping out with the event nearby who came right up to us and asked for prayers. He was eager to have prayers for his leg and his general health, and was in a rush to get back to work. We prayed over him, and he smiled and ran back to his work thanking us.