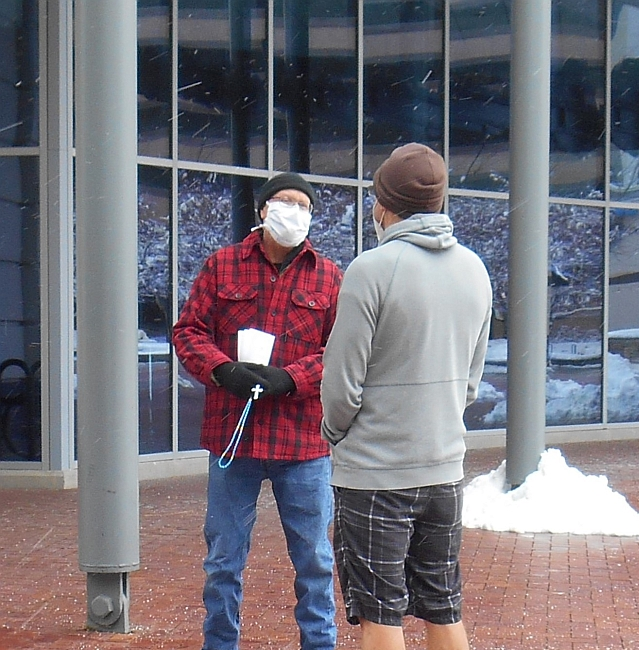 Boise, ID. The team in today’s story faithfully went out, even the day after a record amount of snow fell in their city. I guess you could say they’re like the Post Office: “Neither snow nor rain nor heat nor gloom of night stays these couriers from the swift completion of their appointed rounds.” Today is part one of a two-part story.

9.9 inches of snow fell the past few days, so foot traffic was light. Interest was low, but not absent. A mom broke away from her husband and teenage son to claim a Rosary. She said her son attended Catholic school. When Chuck tried to get the father and son to take a Rosary, the father made a face and shook his head, while the son ignored us and played with his phone. Please pray for faith for the men in that family.

A man in his late teens or early 20s broke away from his group and came for a Rosary when the other two declined. I think he was being polite. Still, he chose one and received a brief explanation of the devotion and the encouragement to pray it. He is a non-Catholic Christian. Pray that God rewards his charity with Faith.

A man approached the table to better hear what we were offering. When he heard it was a Rosary, he replied, “Oh, no thanks, I’m not Catholic.” But he stayed to listen as Chuck explained how the Rosary helps us get closer to Christ. He changed his mind and accepted a Rosary and its pamphlet.