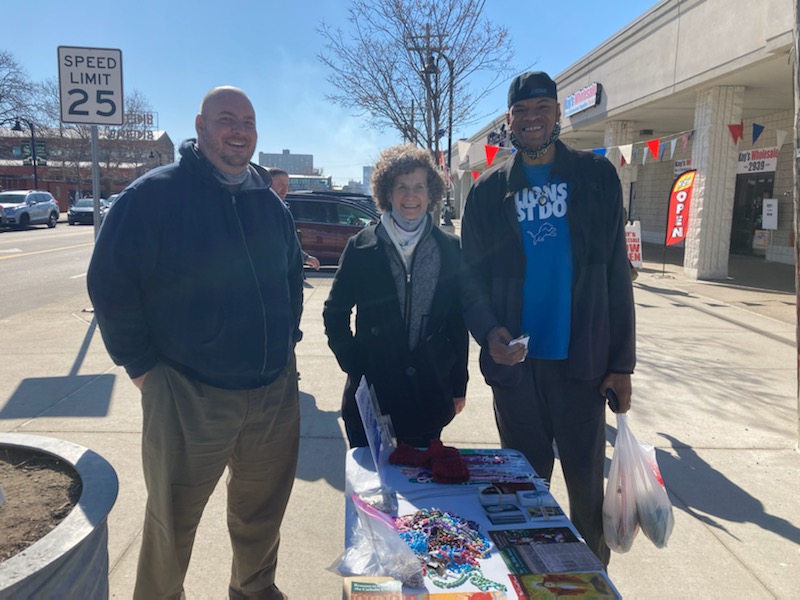 The following report comes to us from evangelist Michael with our National SPSE team:

Today we had three evangelists (Mark, Anne, and myself) in attendance for our second outing of 2021 at Eastern Market in Detroit. The weather was warm (at least for March in Michigan), which meant there were a fair amount of people out and about shopping or running errands.

One of our first encounters was with a man who appeared to be Muslim by his attire and even said something that lead us to believe it. Anne asked if there was anything that he needed prayer for, and he mentioned his young daughter who had a serious ailment. So we joined hands and prayed that God would heal her and also bring peace to this man. He was extremely grateful for the prayer and went on his way, presumably to work.

A very tall man (6′ 9″!!!) who happened to be a minister at a local church stopped to pick out some items for his family. He gratefully received a few chains with crosses & Miraculous Medals on them and Rosaries. When we started explaining the history of the medal and some of the pamphlets, he replied that he already knew all about it. He had sent his daughter to Sacred Heart Catholic School, and had learned about the faith through this connection. We tried to persuade him to consider the church, but he was hesitant. When we offered to get together for prayer, he agreed and said he was a man of his word so we exchanged information and he stated, “expect an email or a phone call.”

Mark and Michael chatted with two kind Christian women who were interested in the chains with Miraculous Medals on them. Mark shared the story with them, and then Michael asked them to pray for the success of our endeavors. One of the women, right there, said a prayer to God on our behalf. Then we offered to pray for them for any issues that they might be struggling with, and one of the women had ankle trouble (after just having a heart procedure). Michael returned the favor and prayed for God to heal her.

Towards the end of our outing, Anne encountered three college-aged young men who stopped to chat. They accepted Rosaries from us and talked for a while. One of the young men had a shoulder injury and couldn’t lift his arm too high without pain. Anne prayed over him, and when she asked him to lift up his arm, he did it without discomfort! Let’s hope that this healing draws him and his friends closer to God.