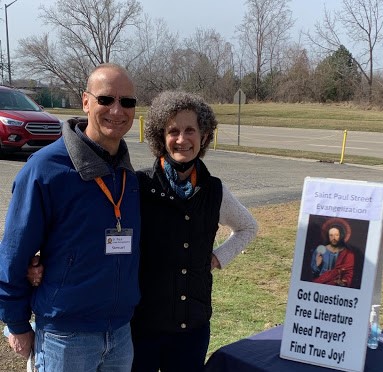 Click here to read more stories from our Matchan Soup Kitchen team
The following report comes to us from team leader Anne in Pontiac, MI:

“Edgar” didn’t want prayer as he passed our SPSE table and said he was “OK”. Our evangelist took his name and said he’d pray for Edgar later and he agreed. As he struggled to carry a gallon of milk, many canned goods, and a large bag of potatoes to his vehicle, Edgar accepted help in transporting items and we chatted about who would drink the milk and what it would be used for. Eventually we made it to the car and I asked one more time if he needed prayer. Edgar said he was good but pointed to his wife in the passenger seat. She indicated that she wanted prayer and rolled down her window. (I was masked and made sure to stand back a bit from the vehicle). It seems her digestive issues began a year ago. And one year ago, we also went into lockdown due to the virus! She hadn’t considered the timing and was surprised that the two issues coincided. The couple said they knew of people that had died of Covid but that they had not contracted it. The wife was happy to receive prayer for healing of her digestive tract and continued protection of the Lord from the virus as well as some other needs mentioned. Thank God from whom all blessings flow.

Also, many conversations happen outside people’s vehicles in Matchan lot after we wander over to their car together whether we are helping carry something or not — often we are. They are relaxed knowing that they were able to get their bag lunch, canned goods, produce, and bread items and are often receptive to conversation.