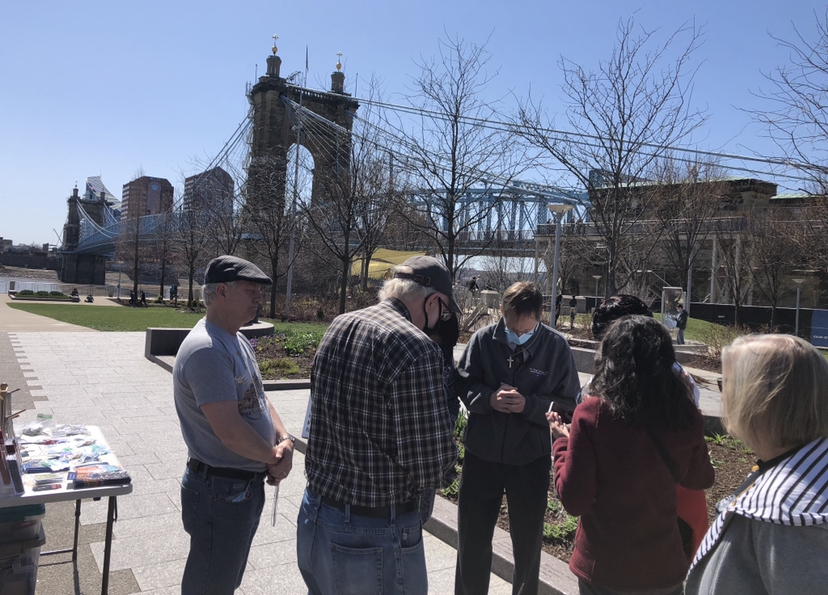 It’s serendipitous that the Lebanon SPSE team shadowed the Cincinnati team downtown at Smale Riverfront Park on the first day of Spring. A happy coincidence not just because it marks the start of our team, but it also marks the beginning of the people who we’ll meet on the street. Five of us from the team were out in the park shadowing Mark and his team from Cincy. If I told you that we weren’t nervous going into this event, that’d be a lie! For many of us, we ran through every possible scenario in our minds. (What if I offend them? What if I get yelled at? What if the cops come? Etc…) Just like most things in life, reality wasn’t as bad as what the anxiety played it up to be. Which is why we should give it to God and not worry so much!

The day was absolutely stunning! Not too hot, not too cold, barely a cloud in the sky, and the first flowers were in bloom. Mark and the Cincy team set up a table over by the Brent Spence Bridge at the playground. Our Lebanon team was there to shadow, however we could help out as we felt comfortable. For the most part, we watched them in action. On the table were the typical pamphlets on how to pray the Rosary, what the Miraculous Medal is, why return to the Catholic faith, etc. Also on the table Rosaries and Miraculous Medal necklaces, crucifix necklaces, and Catholic books. Around a third of those that walked by us took a free rosary and/or medal. All of the items we had out were free. We joked that the magic word is “free”. However, we came to realize the true power was in the word “pray”. It was surprising how readily people wanted to be prayed over! There were a few people that walked right on by, saying “No, thanks” before we could even finish our sentence. But when they heard, “Is there something we can pray about with you?”, they turned on a dime to come back and tell us who they’d like us to pray for. It was incredible how people opened up to us about their troubles and how touched they were when they were surrounded by evangelists praying for them. People that were so quick to want to leave before, stayed to tell us stories, smiling, and hugging the team for the simple act of praying with them. They walked away a little lighter and happier after that simple act. God was truly working in mysterious ways that day!

Shadowing the Cincinnati Team went by so quickly and we learned so much. We have a focus and are excited to continue training over the next few weeks. We are going to slowly start to introduce ourselves to our local community, beginning on April 10th at Let’s Lebanon!, a local business community event at the Warren County FairGrounds.