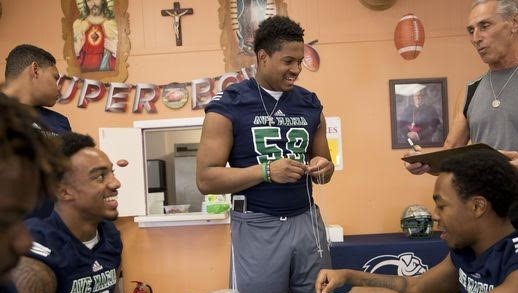 A few years back my husband and I were blessed to join the community at Ave Maria University when my husband joined the football coaching staff. At that same time, a young man named Jessiah started at AMU to play football. Although he wasn’t Catholic, Jessiah went to Catholic high school and college. Interestingly, we would see him at adoration or praise and worship events throughout the school year. We were always stuck by his reverence for the Eucharist especially since he wasn’t Catholic (yet). My husband is in the habit of giving his players Miraculous Medals with St. Benedict Crucifixes and Jessiah received one his freshman year. Also that year the entire football team hosted a Souper Bowl supper at the local soup kitchen where they welcomed and fed those in need. At the supper the football players also gave their guests rosaries and Miraculous Medals.

As time moved on, Jessiah stayed interested in the faith and even led other members of his team closer to God. Jessiah ended up going through RCIA to enter the Church, and guess what?! He entered seminary in the fall of 2020! Thanks be to God!!
Our SPSE director Bob always reminds us that St. Maximillian Kolbe called the Miraculous Medal Our Lady’s “silver bullet.” He called the medal by that name since this sacramental is a channel of grace that often brought about conversions in people’s lives which began with them simply wearing it!! I’m not claiming SPSE brought this young man into the Church then to the seminary by offering him a Miraculous Medal years ago, but I’m sure Our Lady had a significant role in that journey! So, perhaps, that blessed Miraculous Medal and St. Benedict crucifix helped a bit.