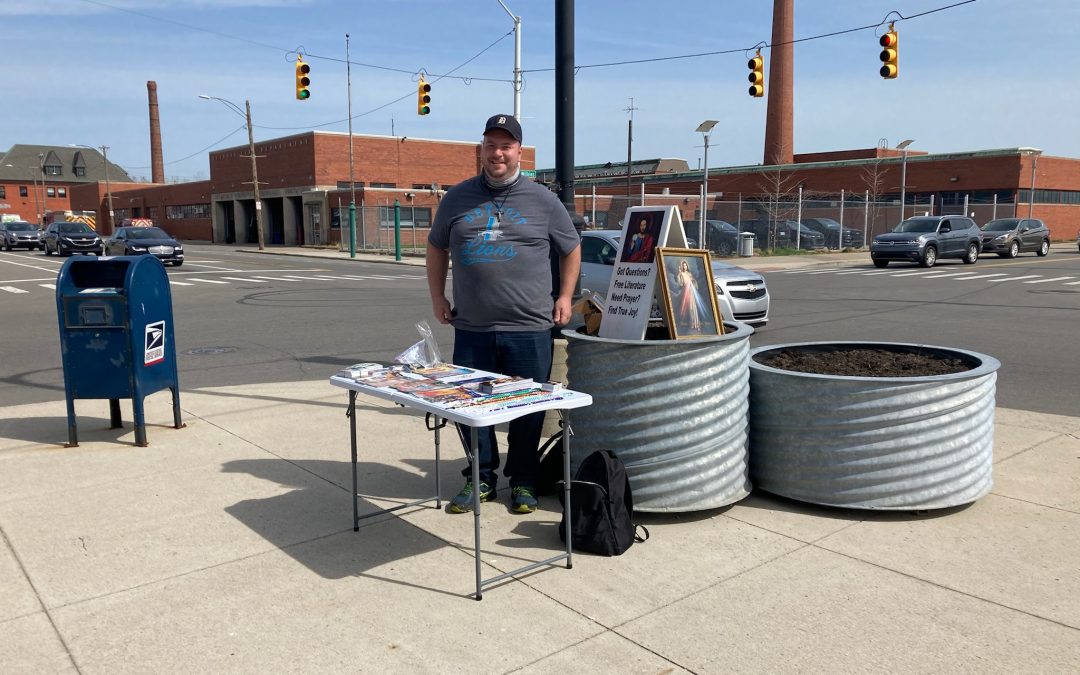 Another beautiful Saturday, with temperatures hitting almost 70. Foot traffic was fairly steady, and two evangelists, Mark and myself, made it out.

Our first encounter was with a young man, “Keith”, who had sincere questions about Jesus and the Catholic faith. Keith said he believed in a higher power, but wasn’t sure beyond that. He also admired Jesus for what he did and stood for. Mark explained to him that Jesus wasn’t just a good man, and made some serious claims about who He was that Keith should consider investigating. We gave him a few pamphlets appropriate for someone just beginning to question, along with a Rosary and accompanying pamphlet. We also told him we were there every Saturday if he ever had further questions. Later on, Mark noticed him in line at the ATM reading one of the pamphlets. May Our Lady guide him home to the Catholic Church!

While we’d had one good encounter up to now, Mark noticed that people seemed to be walking faster than normal today. Michael decided to say a prayer aloud to his guardian angel to contact the guardian angels of people walking by and draw them to the table. Not too long after that prayer, it seemed that we had at least four more good solid encounters with people willing to talk about the faith! Perhaps it was an answered prayer. Either way, we give thanks to God!

One particular encounter was with a woman, “Gina”, who was a former law enforcement officer, who had a steady prayer life, but no faith community to support her. Mark and I listened to her for quite some time as she lamented that she liked being alone, she had no spiritual companionship. I gave her my card and encouraged her to reach out if she ever needed someone to talk to in the future. She also accepted a necklace with a Miraculous Medal and crucifix affixed to it.

Our last encounter of the day was with a gentleman named “Frank” who had an interesting situation he needed help with. Frank was retired and suffered from dyslexia so he couldn’t read. Apparently some people had taken advantage of him and he’d lost about $9,000 worth of possessions. He needed legal advice but since he couldn’t read, he didn’t know how to get in touch with a lawyer. I took down Frank’s phone number and told him I’d try to find him a lawyer and would have them contact him. We asked him about his faith life, and while he did believe in God and pray sometimes, he wasn’t a churchgoer and admitted he still had some sinful things in his life. Mark and I both told him that we’re all sinners and we all need God. We tried to give him literature, but he wasn’t interested. Perhaps our willingness to listen and help will break through to him somehow. God, help Frank know how much he needs You!