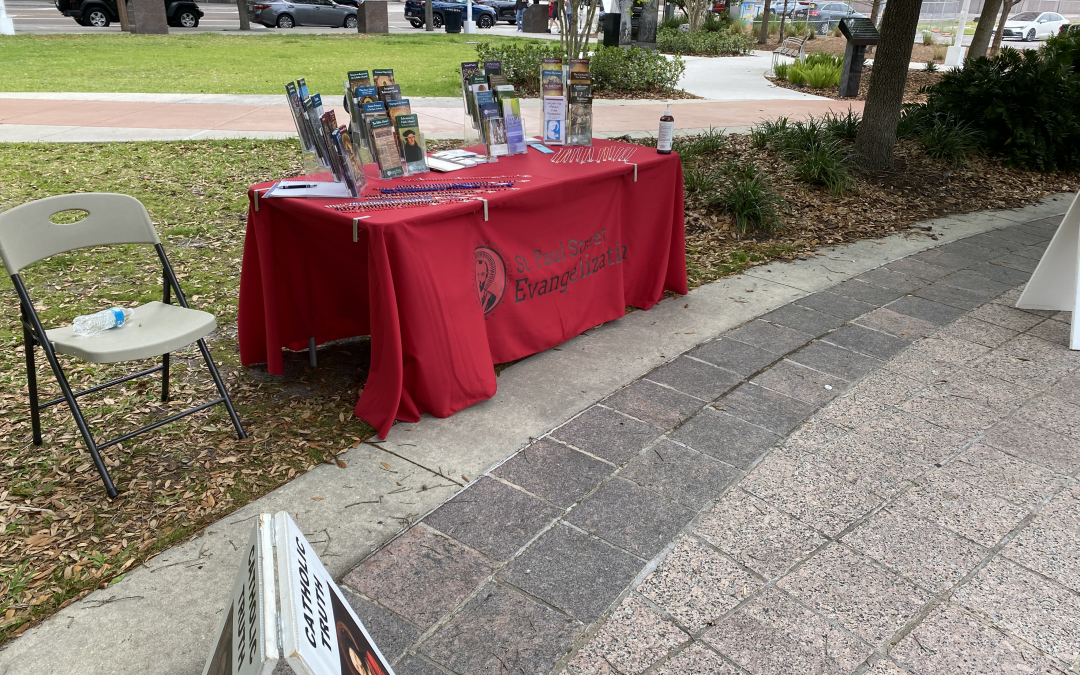 Another beautiful day to evangelize on the Tampa Riverwalk. I’m inspired by the teams from up north that have to brave the weather, but mostly I’m glad we don’t. Our team had a lot going on, so many regulars couldn’t make it. We were down to just three, Stacia, Bob and I, but what we lacked in quantity, we made up in quality.

A young lady named Jolene came forward with an amazed look on her face. She said she had not been practicing her faith lately. Then she had a dream last night of mother Mary and this morning she sees our stand with all the rosaries laid out. That was enough of a sign for her. I told her about daily confession at Sacred Heart up the street a few blocks and off she went.

I’ll bet all street evangelists will tell you this is the response they hear most often when offering a rosary or medal, “No thanks, I’m good.” Well, I got one of them from an African American fellow as he walked by. He went out of sight about 100 yards away before I noticed he was walking back towards our table. He said the picture of Our Lady of Guadalupe reminded him of the Black Madonna that he used to have a devotion to. He had fallen away, but was eager to get reacquainted with our Blessed Mother and took a rosary. I guess he wasn’t “good” without it.

The Tampa Bay Lightning hockey team was playing the Chicago Blackhawks that afternoon. Many people had on jerseys from both teams. One young man named Landon stopped by while drinking a beer. (A good sign to convince someone to be Catholic.) He told us he was discerning the Catholic faith. He was Methodist and felt his faith had recently gone astray. As he told us his story he got emotional. We could tell he was searching. Stacia spoke of her love for the Eucharist, and I addressed his concerns about flip-flopping doctrine not being an issue because of the Holy Spirit’s guidance of the Magisterium. We promised to get him in touch with my favorite Chicago evangelist, Mark.
Finally, there was a mother, June, who wanted a medal for her daughter who was trying to get pregnant. I offered a Divine Mercy medal… no. St. Christopher…no. St. Joseph…no. Miraculous Medal…maybe. My last offering: St. Teresa…BINGO! She started to cry because that was her daughter’s name.