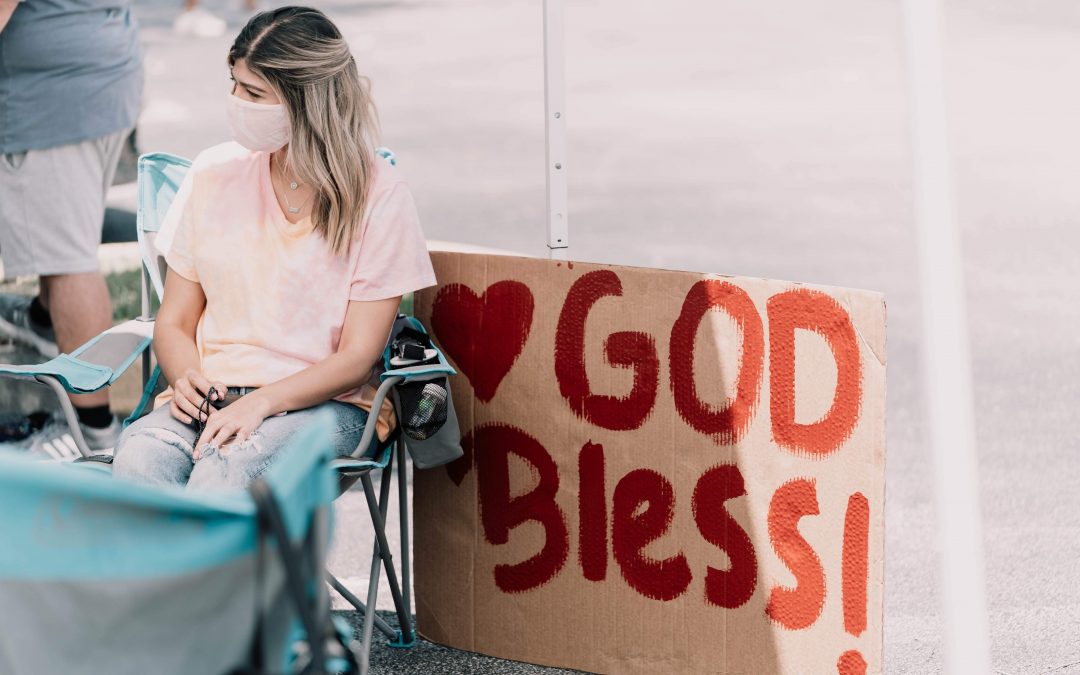 Click here to learn more about our Virtual School of Evangelization
The following report comes to us from virtual evangelization school student Marian in Bradford, IL:

Four of us went out to evangelize today as part of my final project for the virtual evangelization school. It was Leigh, Dcn. John, Kate, and myself. Kate is in my Bradford Bible study, and interestingly agreed to evangelize without asking any questions about what would happen during the outing. She said she was just open to the experience. That is definitely one of her gifts. She also can talk to anyone. I asked her to keep notes of who we spoke with and what their problem was that we prayed for.
We set up a table with a sign and a sandwich sign. Both signs offered “Free Prayer”. We waived at and greeted people, some of whom wanted prayer. A woman named “Christina” asked for prayer for her addiction to alcohol. She is a caretaker for many, and has tried rehab a couple of times without success. Deacon asked if she was baptized. She said no and that she used to go to the Salvation Army, but they moved from town. So glad Dcn. John was present for her. She was clearly in need of pastoral care. He gave her his name and number.

We received many prayer requests, which we lifted up (and we ask others to please pray for them too!). Kae and her daughter Raelynn asked for prayers for her cat that had died, and for good crops. We prayed for Joe, who recently had a liver transplant. Chase asked us to pray for more of God’s love. We prayed for Sue (her friend asked for prayer for her.) It appeared that Sue has cancer. Rick, for a successful and clear colonoscopy. Melissa’s father-in-law, who is in the hospital and her daughter’s classmate Addy, who is having heart surgery. Candy’s sister Roberta, who has thyroid cancer. Tom’s friend Debbie, who has just days to live due to liver cancer. Rebecca, a caretaker and has knee and foot pain. We asked Jesus to allow her to feel His love. Michael, from his truck, said, “This is a wonderful idea.” He asked for prayers for our government and its leaders. Glen recently lost his cousin, Kevin. When asked if he needed prayer he said,“Always.” And finally, Lilly asked for prayer two weeks ago for pain in her knees. She returned and we prayed for her intentions again.