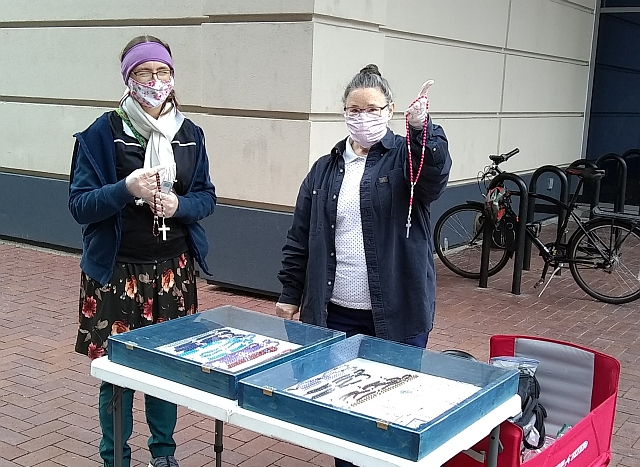 Feeling called to try street evangelization, first-time evangelist Pam joined Chuck and I. People responded well to her! We had a number of encounters, and gave away 15-20 rosaries and its pamphlet. Here are just two of them:
A 20-something man stopped to say he wasn’t interested in Catholic things because he had a bad breakup with a Catholic girlfriend. He was, however, somewhat curious about the Catholic Church, since noticed he had a pattern of picking girlfriends who are Catholic. His idea of the difference between Catholics and non-Catholic Christians is that we have to pray to Saints and he can just go directly to God. Lucy explained the reality of prayer, but he still declined any pamphlets that would help him understand further. Then Pam stepped forward and put a Rosary and the Mysteries in his hand, which he awkwardly accepted. May Our Lady help him see the true Church past his emotional pain.

Another man came to the table wanting pamphlets, as many as we would give him, in order to help him understand what Catholics believe. He described himself as mostly a follower of an early heretical break-off from Christianity. He appreciated that the Catholic Bible was bigger than non-Catholic Christian ones, but he thought it should include all the apocryphal writings. We tried to help him see that we need the authority of the Church and the guidance of the Holy Spirit rather than our own curiosity to decide what is necessary and true. He accepted the stack of pamphlets and a Rosary, he said his girlfriend is Catholic. Please pray the Holy Spirit guides him from his personal theories to Catholic truth.

Praised be Jesus Christ! This team has asked that you please pray for them, and ask God to send people to us with hearts prepared to perceive their need for Jesus Christ and His Holy Catholic Church, and that much good fruit for His Kingdom comes from their evangelization.