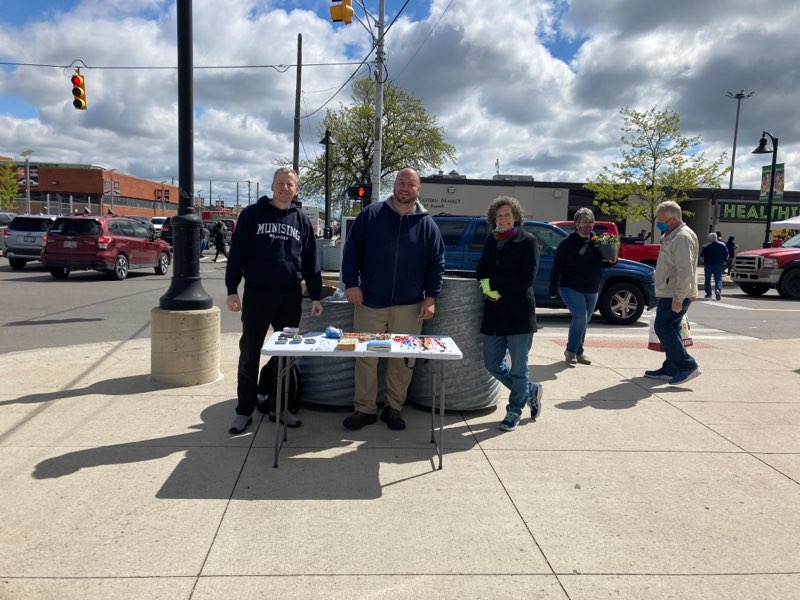 The following report comes to us from evangelist Michael with our National SPSE team in Warren, MI:

Four evangelists, Bob, Anne, Mark and I, made it out to share the Gospel on this busy morning in Detroit. Since the next day was Mother’s Day, and it was nearing Eastern Market’s annual “Flower Day”, we saw more foot traffic than we’d seen all year. Unfortunately, it was colder than normal and most people seemed to be in a hurry, so we didn’t have as many conversations.

We met a homeless man who introduced himself as “Basset”, and helped himself to several holy cards and other religious items. Basset had a deep and quiet voice, which was difficult to hear. Interestingly, once he left our table, he started posting the holy cards he had gathered from us on telephone poles and signposts nearby. Perhaps it was his way of sharing the Gospel! A group of three women approached our table. Mark offered to pray with them and asked if any one of them is a mother. All three of the women responded yes, so we prayed for the mothers and their children, for their health, for their family relationships, and their spiritual well-being. Each woman accepted a rosary and pamphlet.

A young mother approached the table and was eager to take rosaries and guardian angel medals for her four children. She was in a hurry and wouldn’t stop to talk but we hope that the sacramentals will foster the faith and devotion in the family. We also reunited with Robin, whom we spoke to several times before, and she was wearing a Miraculous Medal that she received last year. Robin is a fallen-away Catholic but it’s clear that the Lord is calling her back to the Church. Mark asked if she has gone back to church yet, she responded “no”, with sorrow in her voice. She admitted that she was praying much more frequently though. Bob gave a “Why Be Catholic” to Robin, which she gladly accepted.