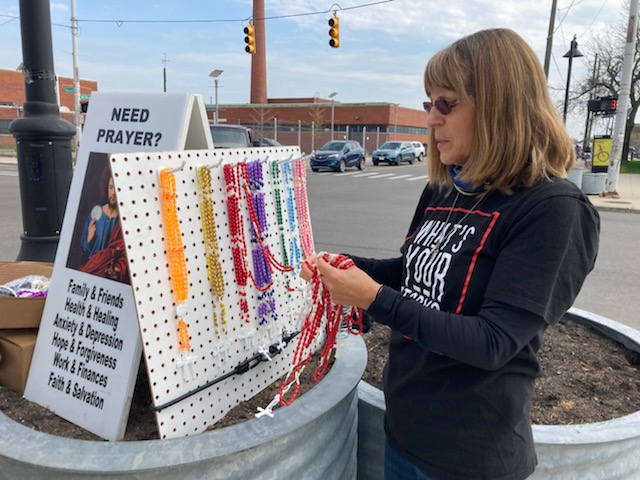 Another good turnout, as Beth, Bob, Mark, Michael and I made it out to evangelize. Some solid conversations today. Here are just a few.

Bob and I had a good conversation with “Stacy”. She began to walk near our table with a look of curiosity on her face. As she came closer, I approached her by offering her a free rosary or Guardian Angel medal. She nodded, saying yes. I then asked her, “Did you know you have your own personal Guardian Angel that was sent by God to watch over you throughout your entire life? And that this guardian’s sole responsibility is focused on watching over you?” She smiled and listened, as I gave her the special medal and a little prayer card to go along with it – which I explained is a great prayer for children to practice. It’s short and sweet, and even rhymes. She then proceeded to our table to see what all else we were offering, and the other evangelists welcomed her and started a conversation with her about the Catholic faith and then prayed over her after.

Michael approached the mailman who was emptying the mailbox nearby, and offered him a Rosary and pamphlet. He seemed pleasantly surprised, and accepted it gratefully…although he wasn’t able to stay and talk long since he was doing his rounds. Later we talked to two young men who both accepted Rosaries. Michael reminded one of them that it is a powerful prayer that brings great peace. He responded that he knew, but had fallen away from the regular recitation. Michael admitted that he too struggled at times with being consistent, and said maybe it was a sign for them both to recommit themselves to this prayer.