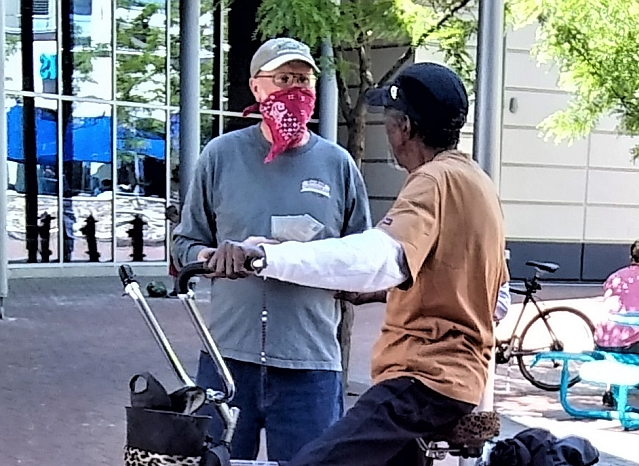 Boise, ID. A busy day evangelizing made our Boise team realize that there are, as they put it, “still many lost sheep yet to be found.” Today we’re featuring the first part of their story, and we’ll follow up tomorrow with part two.

A repeat visitor in his upper teens, “Jax”, stopped when Chuck recognized him and hailed him over. He said his mother loved Rosaries and hung them in their house. We gave him another, and encouraged him to use this one for prayer, though he admitted he is currently enthralled by a non-Christian meditation video. Then he wanted to take the Crucifix off the Rosary and wear just that. We asked him not to, and gave him a plain cross on a chain. The cross kept falling off the chain, but Jax said he made jewelry, too, and could fix it. Mother Mary, please pray for him.

An older man on a bicycle told us we should not be giving out crosses, since they were a symbol of murder. He shared his beliefs which ranged from agnostic to pantheistic, not seeming to notice that they were contradictory. Sadly, he had no patience for hearing about the divinity of Jesus Christ or that there was anything beyond the material world. Please pray his eyes are opened to the reality of the triune God.

“Dominic”, from the eastern part of the country, came unbidden behind our table. He told Lucy that he does a similar apostolate in his hometown, only he gives away a whole bagful of Catholic sacramentals to each visitor. Since that seems to work in his predominantly Catholic community, Lucy didn’t bother to explain the rationale behind our approach. He said he forgot to bring his Rosary pamphlets with him when he came to Boise, so asked for some of ours, which we gladly gave him. He also didn’t have a Rosary with him, so accepted one of ours. (Perhaps it has inspired him to start his apostolate up again, even when he’s out of town.)