“How Do I Become Catholic?” 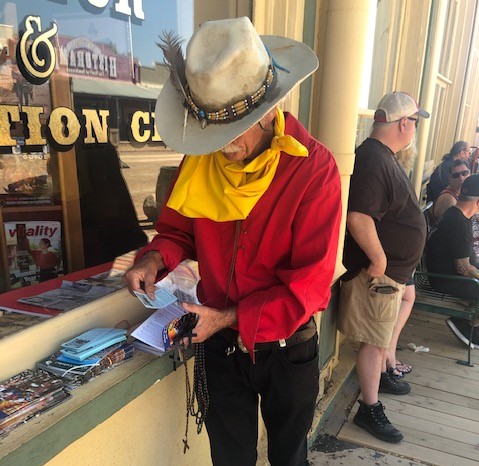 On Sunday, the Wyatt Earp Days were still going on in Tombstone. Ed and Terry (who dressed up as a cowboy!) went back to Tombstone (where Terry lives) and set up in our usual spot. It was a very busy day. Handed out over 120 Rosaries and we put the 15 Promises from Mary in each of the flyers we gave with the Rosary. We also handed out over 120 Miraculous Medals and St. Michael Medals and St. Benedict Crucifixes and bracelets with the Rosary on it that my wife made.
Ed and Terry spoke to a couple and told them that there have been over 150 times the Eucharist turned into real flesh and it was always the left ventricle of a heart that has been traumatized and had white corpuscles meaning it was still alive. We told them that many times the wine turned into Blood – always type AB Positive as was the Shroud of Turin. We gave them brochures on the Eucharist.

Also had a family come up to us and shout out, “ST. PAUL STREET EVANGELIZATION! – we’re from Dallas and LOVE YOU GUYS!!!” They said they taught NFP at their parish and had 5 children with them. Ed told them that 3 weeks earlier, we spoke to a woman who listened to all the talks on Ed’s card and sent an email to him asking, “How do I become Catholic?” (Sidenote: the entire family signed up for RCIA!) Overall, we had a great day!