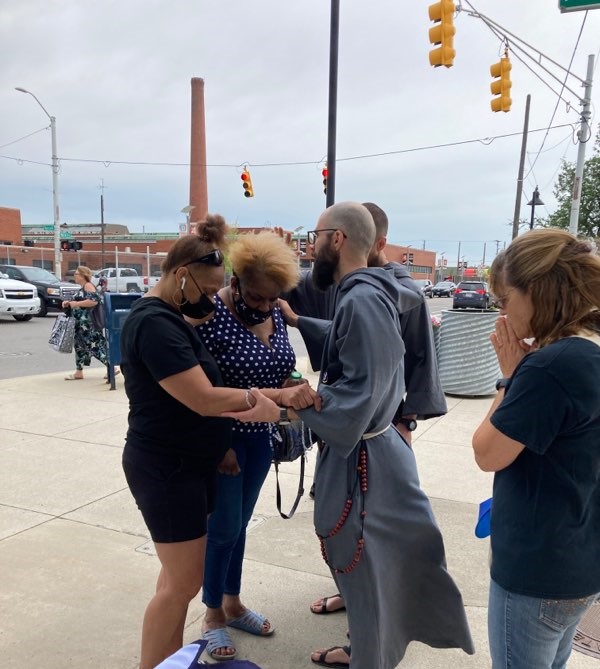 Click here to learn more about our Eastern Market team in Detroit, MI
The following report comes to us from our National SPSE team in Warren, MI:

Eight evangelists made it out this past Saturday, including two brothers and a priest from a local religious order, The Franciscan Friars of the Holy Spirit. Everyone split off into groups and went off evangelizing.

Fr. Antony and Beth met many people, but one that stood out was an encounter with Kathleen, a woman selling flowers who was raised by a Buddhist mother and a Catholic father. She believed there are many ways to God. After conversing briefly, we learned that she was actually in the process of praying for Bl. Solanus Casey to intercede for her for God to heal her detached retina. She then mentioned business was slow, so we prayed that God would improve her sales. All of a sudden, it was so busy that she couldn’t even talk to us, because there were so many people waiting to buy flowers! They also walked past a booth that sold “Pagan potions” and made conversation with the owner. Father engaged with him, and he said he’s searching for something. Father said you want to search outside yourself, otherwise you’re really just worshipping yourself. Unbeknownst to Beth, Father was blessing all the items in his booth while they were talking to get the demons out of them.

Br. Andre was walking through the market, and heard a word from the Holy Spirit that there was a woman working at a popcorn stand who had a desire to be a teacher and work with children with disabilities. He waited in line to speak to her, and when it was his turn, he said I’m not here to buy anything, but that he’d heard this message from the Holy Spirit and asked her “Have you ever thought about teaching young kids?” She said, “yes I’m studying to work with kids with autism.” I stressed to her how much the Lord loves her and knows everything in her life. He gave her a Miraculous Medal and she put it on, and you could see her hands were shaking while she did that because she was so impacted by the Lord’s words. (She also told us she was Catholic.) She knows in a deep way that God sees her and loves her.