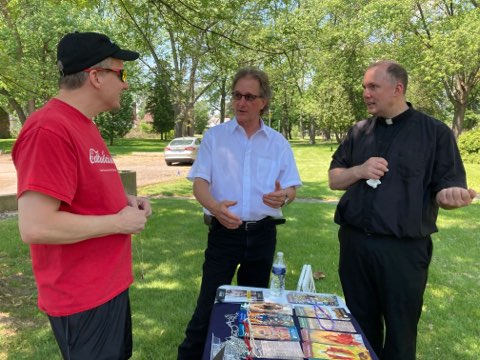 On the feast of Corpus Christi, five evangelists (Steve, Bob, Randy, Mark, and I) set up our display and prayed with people at a parish reception after their Corpus Christi procession. While the attendance wasn’t as high as we’d hoped for, we still had many good conversations and we were able to pray for most of the souls in attendance. Since some folks were perhaps a bit shy, Steve walked around to the tables introducing himself and offering prayer.

A Polish woman, who had some serious health problems, came to us asking for prayer for healing. Steve led our group in a prayer, asking God to heal her if it be His will, but most importantly that she and her husband and child become great saints.
“Jeb”, a former prison inmate for 18 years, talked to us several times over the course of the day. He still keeps in touch with many of his former fellow inmates, and has been instrumental in helping many of them come to believe in Jesus and His church. I even had the privilege of speaking with one of his fellow inmates on the phone. Jeb expressed interest in evangelizing with us in the future too!

Bob spoke with a young boy, probably 10 years old, who bravely walked up and asked for prayers for his female cousin who was suffering from a serious health issue. Bob was more than happy to pray for the young girl.
An elderly man asked for prayers for his daughter who was in a car accident and is unable to get the insurance money needed for her medical bills. The man also prayed for insurance reform so that this doesn’t happen to someone else.