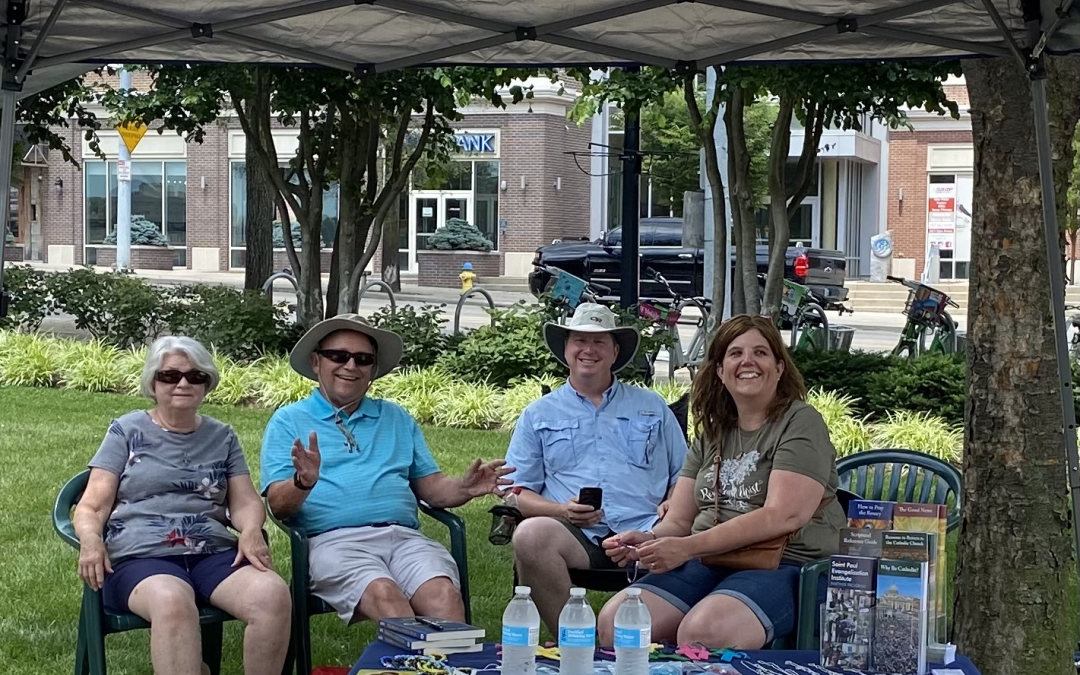 We recently had our first outing at Five Rivers Metro Park, and had our checklist ready. Rosaries? Check! Miraculous Medals? Check! Books, Pamphlets, handouts? Check! Table and tablecloth? Check! First Amendment Permit to hold the event on the park space? Yep! (Shortly after setting up, a park employee wanted to verify that we had a permit. Luckily, we were prepared, presented our permit, and were given permission to continue setting up.)

Being our first outing, weather was an afterthought. Besides, it’s only 2 hours and our training event a few weeks ago was so delightful outside. At the last minute, a case of water, ice, and a cooler were purchased. Thank goodness because it was HOT! Unbeknownst to us, at the other end of the park was a water playground, where most people were at during our outing. And of those who did walk by us, most went out of their way to avoid us. A few were on their phones, too busy to look up. A small fraction took us up on the offer for a free Rosary or Miraculous Medal. At one point, Dcn. Jay suggested we hand out water to people. On such a hot day, this was the key to getting people to stop for a bit and talk.

One gentleman on a bike did a u-turn to come back to our table. He got off his bike and started proclaiming the good news! AMEN! “Gary” appreciated the refreshment and told us he collects crucifixes. He told us he’s studied dozens of religions and they all lead him back to the Catholic faith. He said, “It is only through Jesus that we’re saved.” He told us a story about when he was 8 years old and playing with fireworks when one exploded in his hand. He was in great pain. He knew he’d be in trouble for playing with fireworks and not knowing where else to turn he ran to his room, got on his knees, and prayed to Jesus to take his pain away. He said in that very instance, his pain was healed. He said he had dozens of other stories like that. When he left he thanked us for being there and told us to have a great day. Although we probably gave away more bottles of water than Rosaries and medals, it was a great way for the team to get their feet wet. We couldn’t help but to draw the parallel from bottled water to the living water. To quench our thirst, we drink water; however, for our souls to truly be satisfied, we need the Lord’s living water. “If you knew the gift of God, and who it is who says to you, ‘Give Me a drink,’ you would have asked Him, and He would have given you living water” (John 4:10)