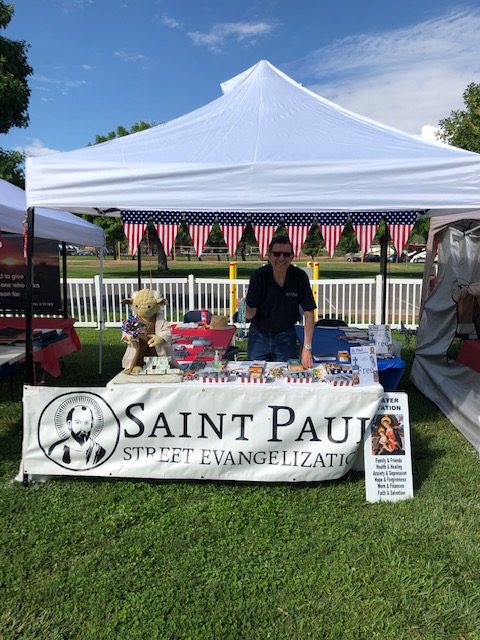 Our city had a fourth of July celebration and we had reserved a booth last January. We set up early and got the canopy up and set out all the medals, brochures and Rosaries on table cloths of red, white, and blue. The first couple was a young girl and boyfriend. They both accepted Miraculous Medals and I asked them if they lived in Sierra Vista. They both said yes. I asked if they had a church they go to. “No, we are both Catholic but we have not been to church in a long time”. I told them that God wants them back. “Do you know how much God loves you?” “No”, they answered. “Did you know that you have 38 trillion cells in your body?” “No, we did not know that.” I continued, “Do you know how much a trillion is?” They admitted, “No, not really.” So I explained that if you have each number of where each number is in feet, then a million feet up gets you about a quarter of the way to the moon. A billion gets you almost to the moon but not quite. But a trillion gets you to the sun and back – and you have 38 trillion cells in your body and God knows what each of them do. Ed continued, “He made you on the sixth day after the sun and moon, and animals. See we are his crown creation! Made in His image and Likeness. Another young couple came by and I said almost the same thing to them. Ed gave both couples the brochures on Confession and the Eucharist and Sexual Purity, and his card.

There were many that came by and I asked them to listen to the uplifting talks on the back of his card. One lady, Cathy, came by and she was very bright and articulate. She told us she was sick of the Epicsopalian church she attneded due to their support for abortion and gay marriage. She told us that she was pretty sure she and her husband were going to be leaving that church soon and so she was at our booth to get some information. She told us that she will listen to the talks on the back of my card and then call the church to set up RCIA.

Overall it was a wonderful day where we handed out over 150 Rosaries, over 200 medals, and about 300 brochures.