“Back at it in Berkeley” 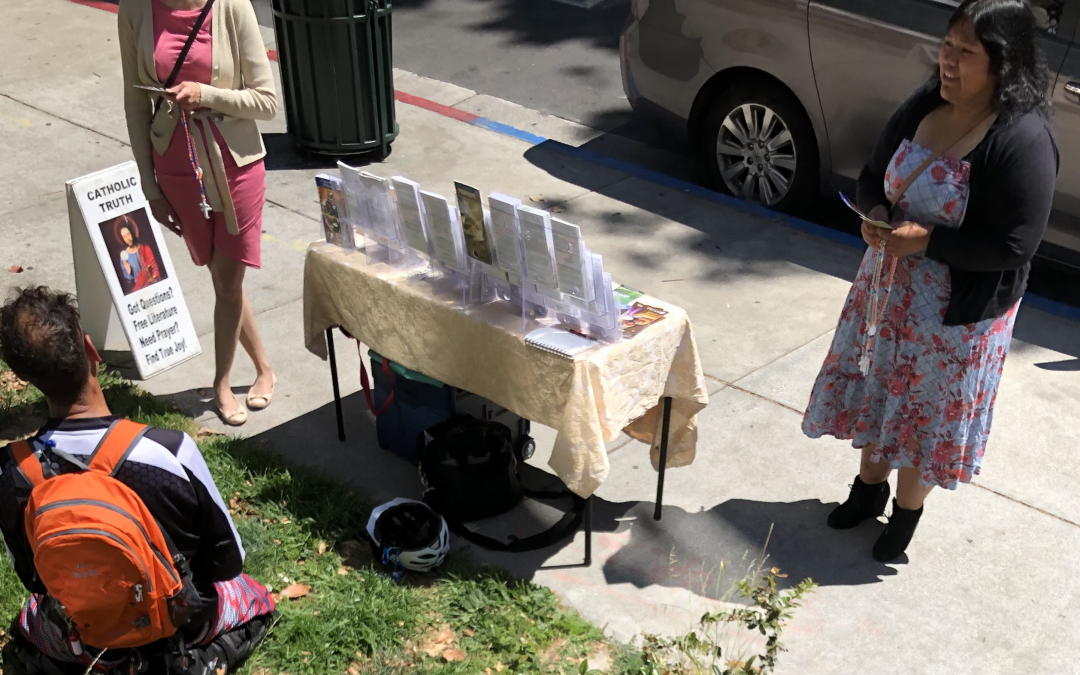 We went out for the first time in about 9 mos. CA has had almost a month to get used to being open. We set up outside the entrance to the Berkeley Farmers Market. Today’s team members were Tracy, Alma, and myself (David). I offered rosaries and Daily Prayer pamphlets and got many “no’s”, but it seemed people were going out of their way to be polite. My first actual conversation was with a man named “Ron”. He has a friend who’s struggling with envy and thought having a Rosary would help his friend with the issue. Next, I met a young lady whose dad is Catholic and whose mom is “Christian”. I told her Catholics are Christian too. She sort of agreed. I started sharing with her how the Rosary is a form of meditation. She liked that and said she enjoys meditation. Then I told her most popular forms of meditation focus on clearing the mind, where the Rosary helps people focus their minds on God. Later on, I met a woman who said she was raised Catholic and asked for the Daily Prayer card. I told her that the pamphlet had morning prayers and evening prayers will come back to her after she uses it.

Tracy engaged with a signature gatherer named “Alex”. He was collecting signatures for something to do with the environment. He accepted a Rosary and shared that earlier in life, he thought he was being called to the priesthood. He’s not active in his faith currently. After learning where he lived, Tracy told him about the closest Catholic Church to his house. Tracy told me about the discussion and a while later, as Andrew was making small talk with me, I gave him a Catholic Radio card and a Reasons to Return to the Church pamphlet. He told me he would go see the church. Later on, Tracy met a very tall roller-blader named “Lou”. He had a lot on his mind, sharing lots of things, many of which had to do with faith. Although he was a bit scattered, it seemed his discussion with Tracy was a real opportunity to talk through things that have been on his mind for a while. Tracy also met with a man named “Roger” who was a former LDS member and missionary. He has some deep curiosity about Catholicism. He brought up the Rosary and they went in-depth with the Rosary pamphlet talking about how to pray it.

Alma met one of the security staff from the farmer’s market named “Cheryl”. She came back twice asking for Miraculous Medals and Rosaries. In tears, she told Alma that we should be there EVERY Saturday and that she was going to use the Rosaries with her grandchildren. She also took the St. Michael prayer card and said everybody could use more Jesus. A man turned Alma’s offer of a free Rosary down because he’s Jewish and kept walking. Next, a young woman came by. Alma asked if she was Catholic, and she said she did not know. Then the Jewish man who said no came back to the table because the young woman was his daughter. In front of him, she accepted a Rosary and he didn’t try to stop her. After looking back at all our encounters, what at first seemed like a day where everyone said no, turned out to be an engaging day.