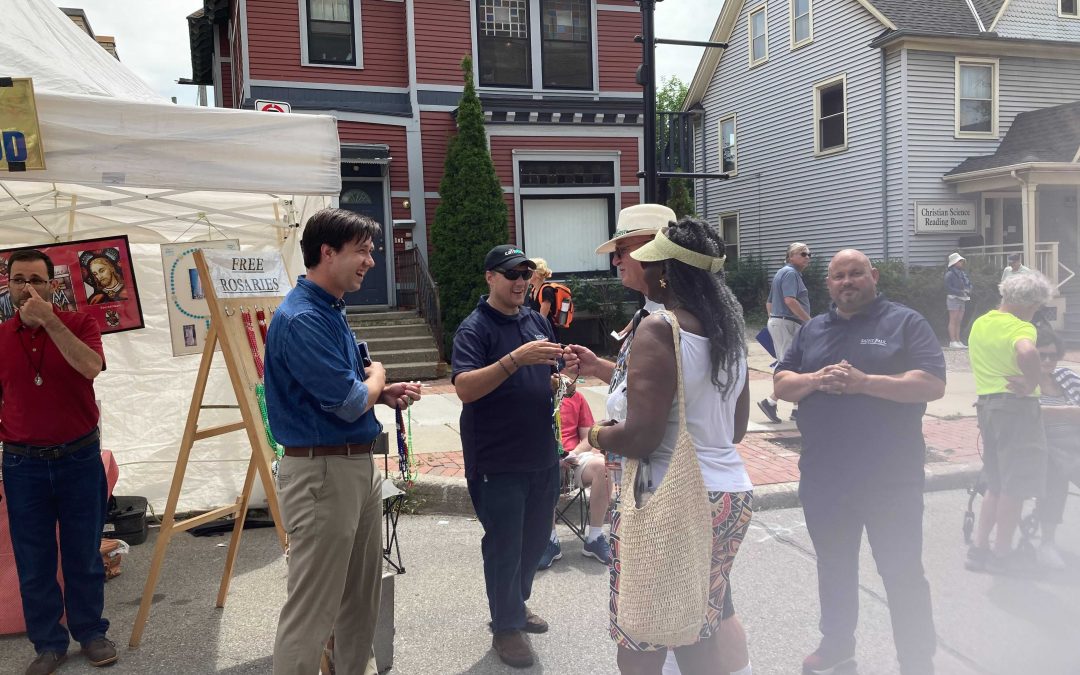 Evangelists from across Ann Arbor and Detroit returned to the Ann Arbor Art Festival after a year’s absence. The festival took place all day for three days, Thursday–Saturday. Joe, the team leader, planned ahead and created a signup sheet to ensure that there would be at least one person in the booth for the entire duration of the festival.

Adam and Mark signed up for one hour on Thursday evening. The first 45 minutes were fairly slow, a few people here and there stopped to accept a free Rosary and Mark made sure that each person also took a guide on how to pray the Rosary. Eventually, a Protestant preacher passed by our booth, Bible in hand, and looked disapprovingly at our collection of rosaries. The preacher identified himself as Terry and began to talk about how he disagreed with many Catholic beliefs. Most of the conversation focused on salvation and purgatory. Terry repeated the claim that “Purgatory isn’t in the Bible.” Mark asked him, “Do you believe in the Holy Trinity?” Terry responded with an emphatic “yes!” Mark said that the word “trinity” isn’t in the Bible either but you believe that. While the exact word(s) may not be spelled out in the Bible, the teaching is definitely there. Mark explained that the word purgatory comes from the Latin “purgatio”, which means “cleansing”, and cleansing is mentioned thousands of times in the Bible. Terry looked at our stack of pamphlets and said “I don’t believe in that”, pointing at the pamphlet about the Eucharist. Mark cited John 6, particularly verses 53-66. Terry became frustrated and walked away silently. Pray that Terry’s zeal and study of Scripture may lead him home to the Catholic Church.