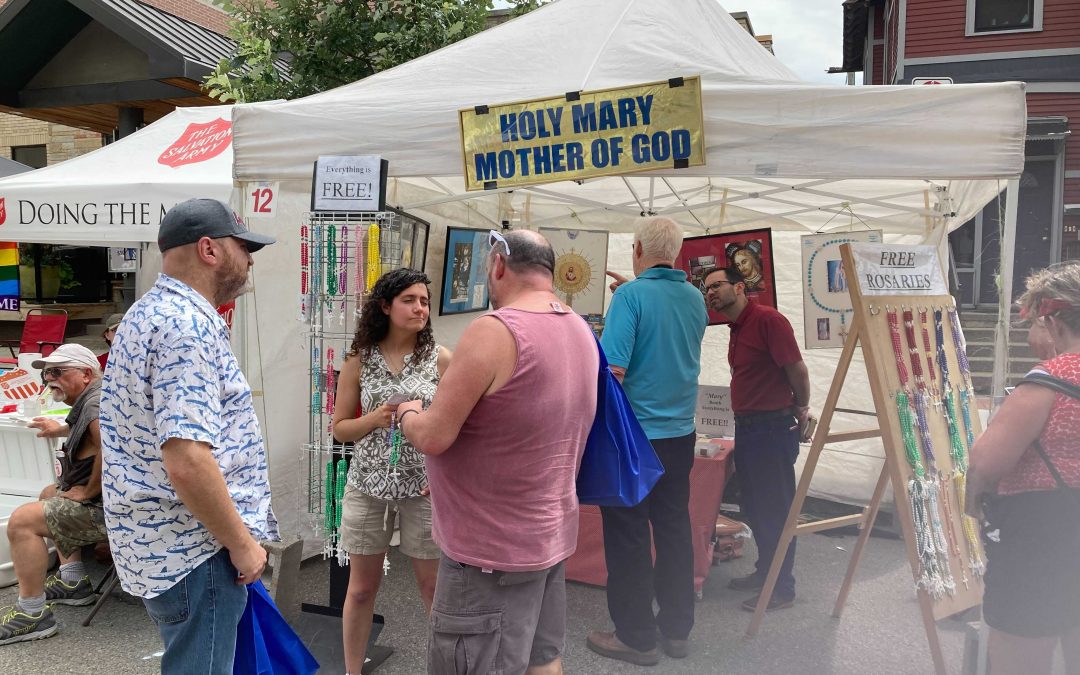 Adam and Mark evangelized at the Ann Arbor Art Festival last Thursday evening, the first day of the festival. We had a booth in the non-profit section among a dozen faith-based groups, charities, political groups, and special-interest groups. Three Protestant churches and two mosques also had booths and members present.

A young man, about 18 years old, approached our table, showed Mark a copy of the Quran and asked, with a smile on his face, if it would be a “conflict of interest” if he accepted Catholic literature after accepting Muslim literature. Mark said that all religions, notably Islam, have some degree of truth. However, only the Catholic Church has “the fullness of Truth.” All other religions believe in some errors to one degree or another. Mark asked if the young man currently practiced any religion or if he is a “seeker”. He said that, yes, he is earnestly and passionately seeking. Mark advised him to pray, study, and follow the Truth. If he did all of that, it would definitely lead him to the Catholic Church. The young man accepted a pamphlet on “Why Be Catholic?”, a rosary, and a guide on how to pray with it.

After his shift, Mark toured the festival and passed Muslim booths several times. Each time, a Muslim man offered Mark a Quran and he politely declined. Mark returned to the Catholic booth and grabbed a handful of Miraculous Medals and returned to offer a medal to one of the men, noting that it has an image of “Miriam” and the medal is known for many miracles. The first man politely declined, saying that he could not accept any religious imagery. Mark moved on to a second man about 20 feet away. He didn’t say anything and simply shook his head in disapproval. Mark said “God bless” and walked away. May Our Lady lead all Muslims to her Divine Son!