“God Loves Us Amidst Our Suffering” 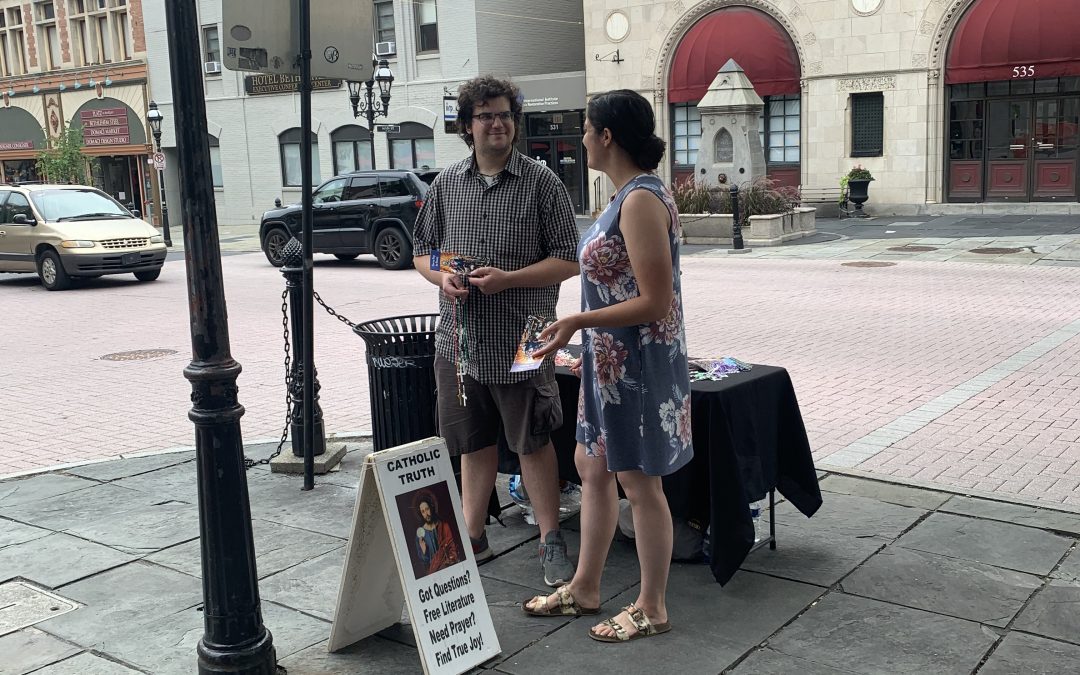 Click here to learn more about our team in Allentown, PA

This report comes to us from evangelist Annaleigh with the team in Allentown, PA:

We had four people including Chris from New Jersey, Maria, Nick, and myself head out to evangelize on a recent Sunday. The following are just a few of our memorable encounters.

We asked a family if they would like some free rosaries. The family said no thank you and continued walking. However, the mother/grandmother turned back around, called us over, and said, “I am a Christian, and we are on the same team.” She then explained that it was her birthday and teared up as she told us that she lost her husband a year ago. While she was enjoying her day, she talked about how she was married to him for sixty years, and it was difficult for her most days. She gave us her full name and asked us to remember her. We believe that she wants us to continue to pray for her. Would you please pray for Sue?

It is easy to stereotype and think that teenagers will not be open to faith but think again. Yet, young teen girls wearing belly shirts stopped to listen as I offered them Miraculous Medals. I explained who the Virgin Mary is and how many people have been kept out of harm’s way while wearing the medal. The girls accepted the medals, said thank you, and walked off. One girl put it on as she walked. Later, the girls came back around the block, and we saw that all three girls had the necklaces on. As they passed, Maria offered them each a rosary. They walked past at first, but one girl came back and said, “Actually, can I have a rosary?” She picked out her favorite color, took a pamphlet, listened to a brief explanation, and quickly ran back to her friends with a slight smile.

One person walked past without taking a rosary. Nick asked if we could pray for anything. He got emotional and said, “Can you pray for my daughter?” Nick asked if there was something we could specifically pray for. The father said, “She recently was in the hospital, and we thought we were going to lose her.” He said his daughter’s name, and immediately my ears perked up because the gentleman looked familiar. I came over and asked a few questions, and it turned out that it was the father of one of my former students. About a half-hour later, he brought his daughter over to say hello, and I was able to hug her and let her know I was praying for her. The family was clearly shaken over this hospital intake, and I was able to share words with her about how God loves us amidst our suffering. Suffering is a mystery so deep that sometimes it’s hard to understand; however, it was out of Christ’s suffering on the cross that we were redeemed.