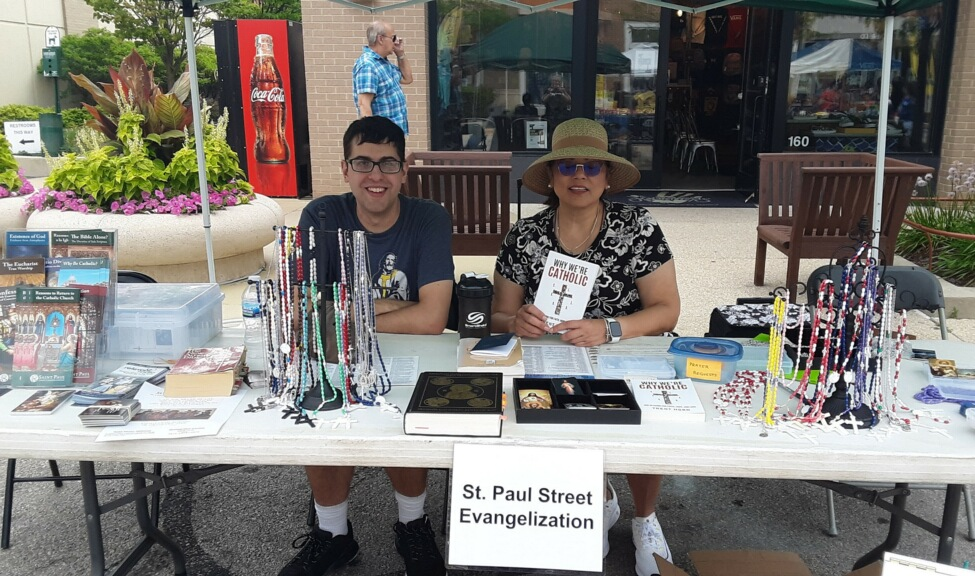 It’s been a long time, but our team finally made it back to a large event! (We’ve done a few smaller outings during the pandemic, but our team wants to reach as many souls for Christ as possible.) We met a lot of people, prayed for and with many others, and were able to have some great conversations. We hope we were able to lead people closer to the one Church founded by our Lord Jesus and to Him in the sacraments!
The day started fairly quiet as we got our booth set up at 10 AM. We weren’t expecting many people until lunch time, and we’d be there until 8 PM. The first person to come up arrived with his young daughter. “Jim” saw our prayer station sign and said he could always use some prayer. His daughter wanted one of the rosaries and we gave her the “How to Pray the Rosary” pamphlet, asking her to have her father pray it with her. He said that he’d felt like the “lost sheep” for the longest time, but that our Lord had found him again just six weeks ago. He said he used to be Catholic and went to a nearby parish, but he said he never “felt” anything. We encouraged him to return to the Church, but he didn’t want to take any other sacramentals or further conversation and he parted amicably.

Most of my experience early in the day was praying with others, not so much discussion. “Diane” came up to us, a Lutheran, and said she was in need of prayer as two of her adult children have disowned her and will no longer talk to her. She broke down into tears, but was very comforted by our prayers and thanked us profusely, her and her friend taking rosaries. Another woman, “Maryella”, came up to our table looking at our rosaries and other items. She seemed reluctant to engage us in conversation, but we showed that we were friendly and she stayed to talk with us for quite a while as it was clear she needed prayers. She was Greek Orthodox and told us that she paints icons. She finally asked us for prayers for her daughter, Victoria. Maryella broke down, sobbing, as we prayed. Her daughter is currently studying abroad in England, and she is very sick after taking her first COVID vaccine, with an adverse reaction causing her arm to swell up and she is now in the hospital. Maryella was very scared for her because she had no way to reach her daughter, but she was comforted as we prayed together and asked for the protection and intercession of the most pure Virgin Theotokos, Mother of our God. She also took a St. Michael medal and prayer card and was very thankful for our prayers. We handed out many, many rosaries and Miraculous Medals to others, and also handed out quite a few books and pamphlets. One young man even took home a copy of Dr. Edward Feser’s “Five Proofs of the Existence of God” we were giving away!