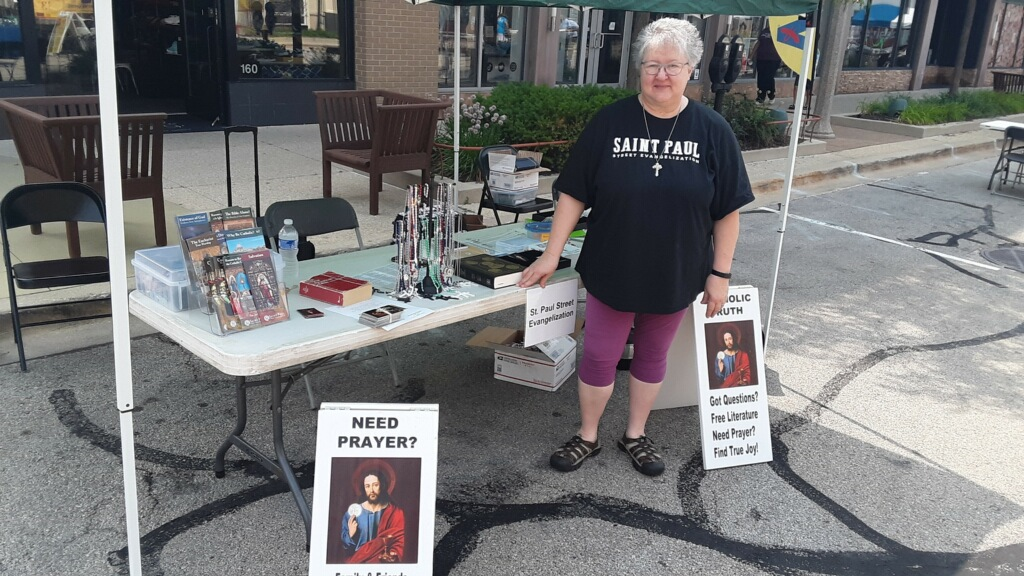 Later, when I returned for my evening shift, a young woman, “Annie”, came up to our table and engaged us in conversation. She asked for prayers for her mental state, and for peace. After prayer, she said she belonged to a Baptist church, but she hasn’t really gone to church on a regular basis, noting to us that this is something she should be better about. We talked about the necessity of coming together as a community, as Christians, and I asked her if she was baptized. She said that she was, and I gave her a prayer card invoking the Holy Spirit, so that she could grow closer to Him and have those graces within her activated. We then talked about the necessity of gathering together at church, and I told her that the most important reason we must gather together is so that we receive the Eucharist. She’d never heard that word before, so I explained to her that in the Catholic Church established by Christ Jesus, we receive Him in Communion. She remembered Communion from her days at a Catholic high school where she’d attended Mass periodically. I explained to her why we as Christians must be joined to our Lord in the Eucharist, and encouraged her to take the pamphlet on The Eucharist, which she gladly accepted before departing.

Our last encounter at the end of the night was with a young man named “John”. He wore a shirt that had a crown and a cross. He looked at us and said, “Hey guys, look at my shirt!” I responded, saying, “Jesus is King!” He laughed, and shook hands with us. We learned he loves Christ and we found out we have a lot in common. He understood the threefold office we have been given through baptism; that we share Jesus’ priestly, kingly, and prophetic offices. He called himself “non-denominational” and was hesitant to call himself a Christian. He just wanted to follow Jesus and hated all the divisions in the Body of Christ. Our other evangelist, Anthony, concurred with John and told him that the first Christians simply called themselves followers of “the Way”. I quoted the words of a local Catholic priest that being a Catholic Christian isn’t so much about identifying as a certain group, but that it’s “a way of seeing” as Christ wants us to see, and that must be in a sacramental worldview. I gave him my testimony of why I was Catholic, and quoted the prayer of our Lord to the Father that all Christians might be one as He and the Father are one. I told him that Jesus doesn’t want division, but wants to lead us into all truth, including the Church He founded. We asked what he thought of the Catholic Church and he said that he had gleaned good things, but worried that different confessions took away from the centrality of Christ. We agreed and told him this is why we’re Catholic, and that we want to keep the focus on Christ, but to remember the focus of his teaching. Quoting Dr. Tim Gray, I told him that if he accepted Jesus as King, then he must accept Jesus’ Kingdom as well. We talked about the parables in Mathew’s Gospel which focus on the kingdom, and that this Kingdom is currently in seed form, for as the Catechism says, “The kingdom of heaven was inaugurated on earth by Christ. This kingdom shone out before men in the word, in the works and in the presence of Christ” (LG 5). The Church is the seed and beginning of this kingdom. Its keys are entrusted to Peter.” We talked a bit more, and I offered him a copy of Trent Horn’s book, “Why We’re Catholic”. He balked at first, but then said it might be good for him, as he might find something useful. Our other evangelist Nina told him about our diocese’s final event the following weekend for Theology on Tap, and he exchanged info with Anthony. We all parted amicably, and by that time, the night was over.

Praised be Jesus Christ! Please keep all we encountered in your prayers!