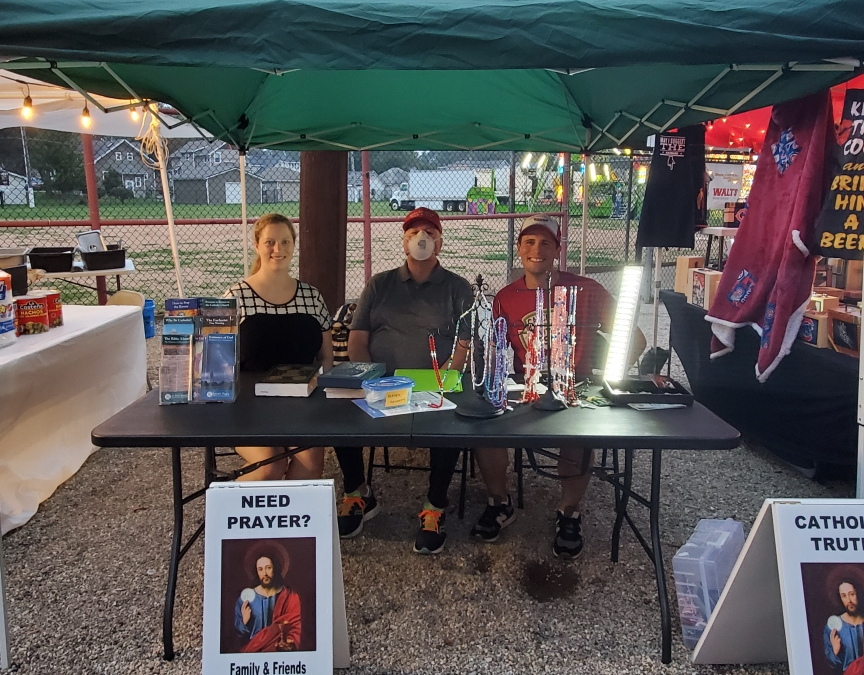 We recently spent the afternoon at a booth in Beecher for their annual Freedom Fest, moved from July to Labor Day weekend due to COVID. Although our location didn’t have the best foot traffic, we were conveniently located next to the taco booth, which is how we met “Joe”. Joe kept glancing our way while he waited for his tacos, giving me the perfect opportunity to strike up a conversation. Joe revealed that although he had fallen away from the Catholic Church many years before (he believed he could pray on his own without the company of other people), he believed in Jesus and read the bible. When I asked him if he followed what Jesus said in the bible, he enthusiastically agreed. I then responded that in the bible, Jesus said we should build a church. Joe became silent, clearly deep in thought. My fellow evangelist, Bill, asked Joe for a favor. Bill requested that Joe go home and pray that God would lead him in the right direction, whatever that may be, in terms of membership in the Church. Joe said he would. Then he accepted the SPSE pamphlet, “Reasons to Return to the Catholic Church”, and left to pick up his tacos.

We’ve been fortunate with our vendor booths to have some interesting conversations with our neighbor vendors, and this afternoon was no exception. Nick learned that taco salesman “Manny” was in formation for the diaconate! On the other side of us, after chit chatting all day, cigar box saleswoman “Rita” accepted Angelica’s invitation to pray together and took a Miraculous Medal.

Praised be Jesus Christ! Please join our team in prayer for the souls they encountered that afternoon!