“Jesus Loves You and Wants to Heal You” 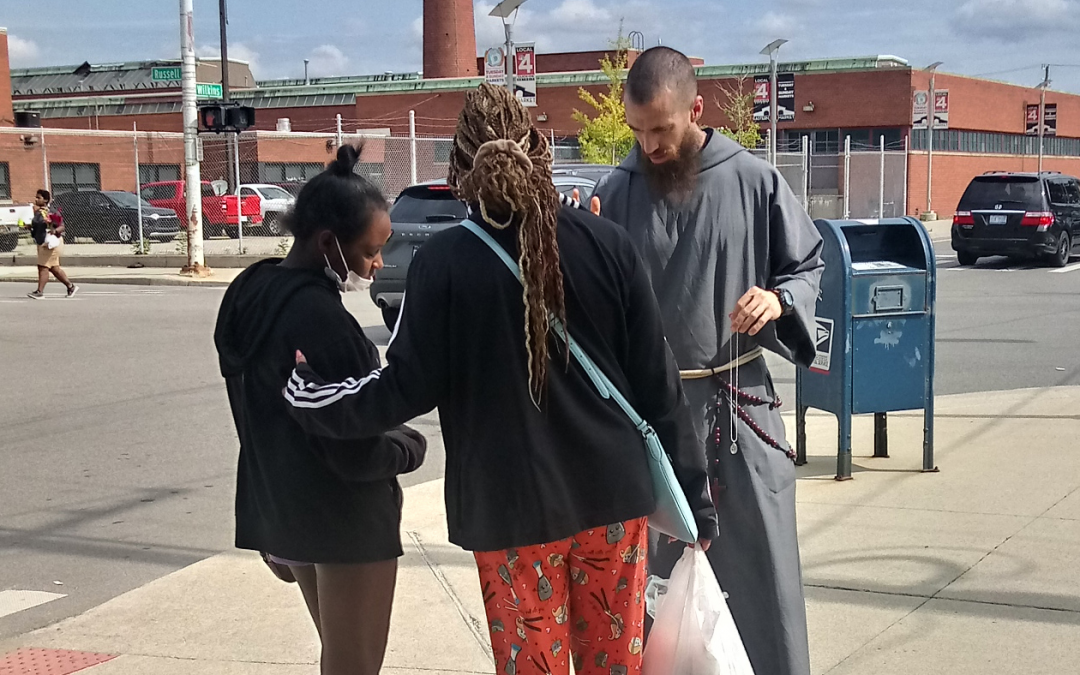 Br. Andre, Michael, and I evangelized at Eastern Market on Labor Day weekend. We set up a table at our usual spot on the corner and had a few short conversations in the beginning. Most of the early conversations were brief but several people accepted Miraculous Medals and a few were happy to receive intercessory prayer. Michael had to leave after an hour, so Br. Andre and I took down the table and walked around the market. Br. Andre often receives a “word of knowledge” when he evangelizes — as we walked, he abruptly stopped, turned around, and approached a young woman selling flowers. Brother asked if she was experiencing neck pain. She was surprised to hear that he knew about her pain and was intrigued with what he had to say. Brother told her that “Jesus loves you and He wants to heal you”, then she became defensive. We offered to pray for her, which she declined multiple times. We then offered her a blessed Miraculous Medal, which she also declined. So we simply said “God bless” and kept on walking.

I noticed a woman wearing a large rosary around her neck. I thought that she’d be somewhat open to Catholicism so we approached her. Candace described herself as “spiritual but not religious”. She accepted a Miraculous Medal and we prayed for her health. Immediately after that conversation ended, a man in his late thirties approached us. He and his wife saw Brother’s habit and overheard our conversation so they became curious. The husband, Ryan, asked Brother about his lifestyle and vocation. Br. Andre briefly explained the life of St. Francis and the vows of poverty, chastity, and obedience — Ryan was particularly surprised about the vow of poverty. He also asked why we go to Confession to a priest rather than “directly to God.” I responded by quoting John 20:23 (“Whose sins you forgive are forgiven them, and whose sins you retain are retained.”) as well as James 5:16 (“confess your sins to one another and pray for one another, that you may be healed.”) I continued and said that, yes, of course, God CAN forgive sins on His own power, but it is His will that we repent and confess our sins to a priest in the Sacrament of Reconciliation. The couple thanked us for our time but refused any sacramentals. Pray that their curiosity will lead them home to the Catholic Church!