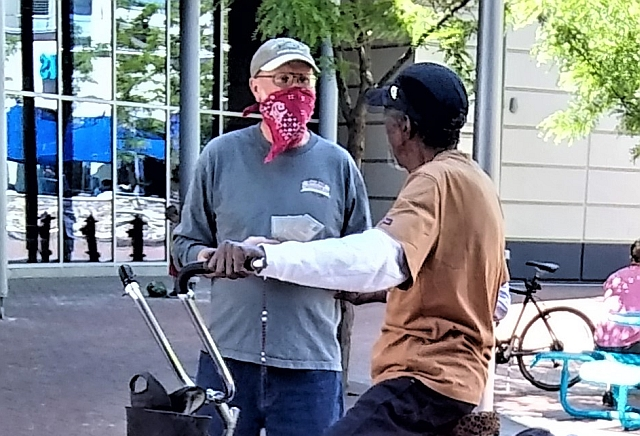 As we were setting up, a man on a bicycle, “Tony”, stopped to look over the few Rosaries we were beginning to set out. He had just been to (a non-Catholic Christian) church for the first time since his recent “fall off the wagon”. At the service, the sermon was on forgiveness and spoke to his situation. He acknowledged he got in trouble again shortly after his life started going well, he became overconfident, and then broke his habit of regular prayer. Soon, he was “making bad choices” again, and ended up “homeless and riding around on a bike.” He was receptive to our encouragement to find a quiet place and pray the Rosary. He also wanted a copy of our pamphlet on Suffering. Pray for Tony, that he will persevere in living out his faith in Jesus.

An extended Catholic family had rented one of the convention centers in the business park for a wedding, which included Mass. At least 10 of the out-of-town family members (in groups of three or four) came to our table. A few of them chose a Rosary, since they didn’t have one with them, but all of them thanked us for being there. May God bless their entire family and keep them close to Our Lord!

A man and teenage daughter stopped, who were non-Catholic Christians. Chuck explained the Rosary devotion to the father, while I talked to the daughter. The daughters’ face froze into a polite smile at the mention of Jesus Christ, and she stepped back and away as soon as possible. May God touch her heart!

Praised be Jesus Christ! Please pray and ask God to send people to us with hearts prepared to perceive their need for Our Savior Jesus Christ and His Holy Catholic Church, and that much good fruit for His Kingdom comes from our Boise team’s efforts.