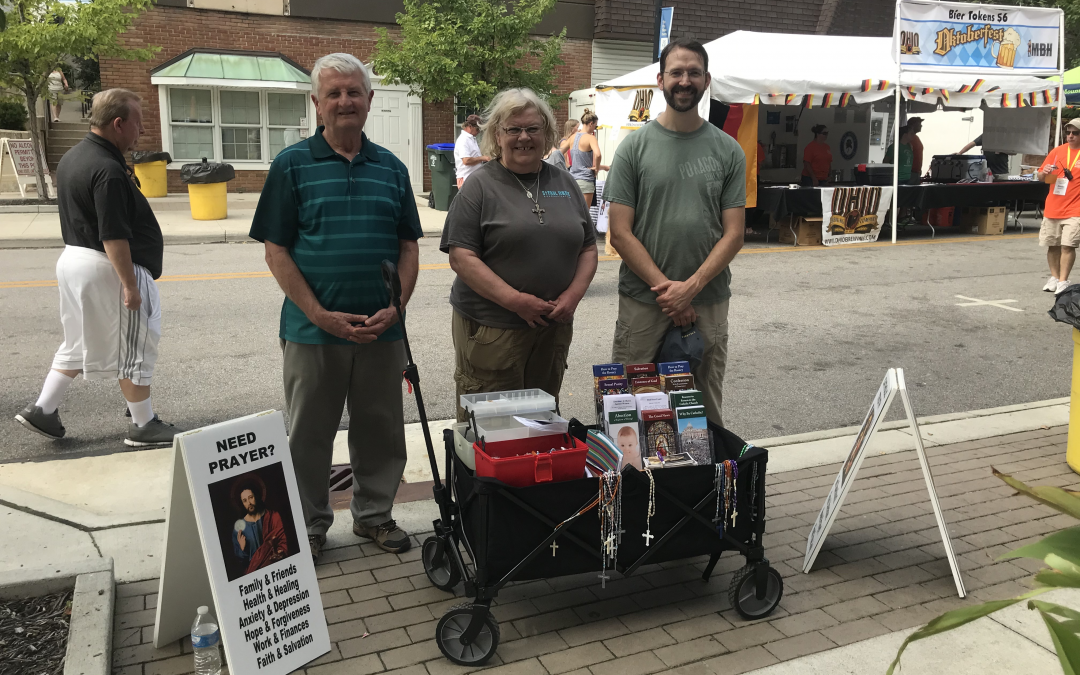 Don, Matt and I headed out to Oktoberfest on a hot, sunny day. It was Matt’s first time out. The Lord is graciously sending us evangelists and people to pray for. Our first encounter was with parishioners of Saint Joe’s so we knew we had wonderful prayer warriors lifting us up today. We prayed with 10 people.

One woman was Jewish with her two daughters whose husband is Christian. We shared similar stories about the prophecies which Jesus fulfilled and His Real Presence in the Holy Eucharist, and the similarities between the Levitical sacrifices of the Jewish people and our Catholic Mass. She was interested in the information, and I invited her to St. Joe’s for Mass and she took info on the Catholic church. She had asked for prayers for our country…which of course led into a beautiful conversation about founding principles and morals and common ground. Her two young adult daughters and herself all took Rosaries.

One woman stopped and asked for prayers for her son in the military who may have to quit rather than be forced to take the shot. We prayed to Our Sorrowful Mother, and I explained the devotion to her. She is a former Catholic and now attends the non-denominational church Chapel in the Falls. She took information on returning to the Catholic Church and we talked about going to Confession and the Real Presence in only the Catholic Eucharist. She took a bulletin from St. Joe’s and I gave her my phone number to go for coffee. Another young man with a small baby stopped and agreed to receive prayer. He was very open to hearing about the Catholic church, and lives only a block away. He also took a bulletin from St. Joe’s and we invited him to Mass. He took info on becoming Catholic and was very grateful for our prayers and our ministry. The three people who took Miraculous Medals let us put them around their neck.

All in all, it was a great day for our first attempt at this venue. It was very crowded and hard to find shade. Next year we will put them at the top of our list and hopefully cover more time slots. A great place to meet people from Cuyahoga Falls, and being on the sidewalk, it didn’t cost us money!