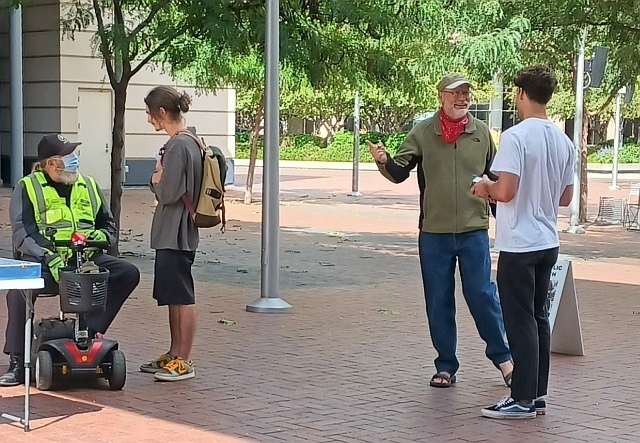 Foot traffic was light today, which gave us opportunity for several extended conversations. As we were setting up the table, two men in their 20s asked what we were doing. “Sage” and “Hunter” were interested in religion though Hunter was agnostic and Sage was “spiritual, not religious.” Sage believed “religions form a barrier to God” because, he said, they were merely manmade. He believed his own pantheism was the real thing. When Chuck gently pointed out that his own professed belief was man made, he broke off from our conversation and went over to talk to “John”, the parking lot attendant, who had been listening in and making occasional wry comments. Hunter, though, then kept Chuck engaged with lots of questions. He was shocked to learn of the Incarnation, had never heard of the Triune God, and could not wrap his mind around the reality that God was not just another part of the universe. When he admitted that he was “a little drunk”, it explained his difficulty holding onto any single thought. We don’t know what John and Sage were talking about but, as you will hear, it seems their conversation emboldened John to later share his own “spiritual but not religious” beliefs. Both young men chose a Rosary. We also gave Hunter an “Existence of God” pamphlet and Sage a “Good News” pamphlet. We told them we are there each Sunday, and invited them to come back and talk anytime. Please keep these young men in your prayers.

After Sage and Hunter left, “John” drove his motorized chair around to face Chuck and express his belief that all the world’s religions point to the same goal and simply represent different paths to heaven, and any disagreement between religions just discourages others from seeking God. He even told us a lengthy allegorical story that he’d made up to illustrate his beliefs. Chuck countered John’s assertions by sharing his own allegorical story: Imagine a family in which the parents taught each child separately how to do the dishes. The first was taught to load the dishes in the dishwasher unrinsed, and heaped randomly. Another was told to pre-rinse and load them precisely. Yet another was told to avoid the dishwasher and wash everything by hand. And the last child was told to simply let the dog lick everything clean. But each child was also privately instructed that their way was the ONLY right way, and there would be dire consequences if they tried to wash dishes any other way. Now, when all four kids are sent to clean up after a large meal, imagine the fight that happens. But the conflict is not their fault. The blame lies with the parents who, displaying no love at all, merely used the children for their own amusement. One may claim that all four ways lead to the same thing, clean dishes, just by different paths. Yet, the existence of different paths reveals unloving, cruel parents who are not the least interested in family unity. Such is the god of the “all religions are the same” school of thought: an evil trickster god whose creation is merely a plaything. This is not the God of Christianity, Who is a loving parent, Who entrusted to His children a single and glorious path to Himself, Who sealed His promise with the sacrifice of His own Son, and Who shares His very Spirit with us. All other claims of another way to God do not find their source in Him. May John know he has a loving Father who wants to draw him into the unity of His family, the Church.