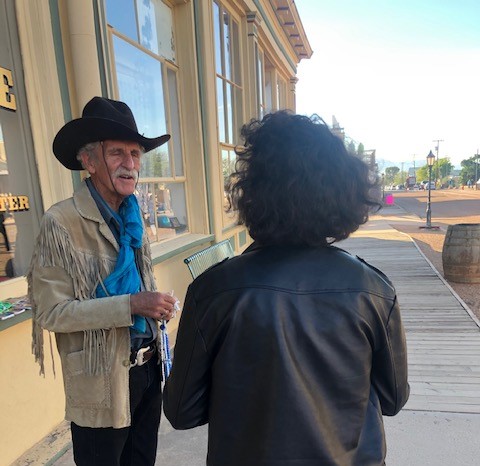 Today we went to Tombstone to evangelize at the Native American Days there. We handed out over 100 Rosaries and how to pray it and the 15 promises of Mary along with 100 Miraculous Medals and 75 St. Michael Medals and 30 Our Lady of Guadalupe Medals. We also handed out many of the 10 Reasons the Catholic Church was started by Christ flyer.

We spoke to many people. Many were Catholics who had not been to Mass since Covid started. They told us they were watching it on the internet. Terry told them that Jesus said, “Unless you eat the flesh of the Son of Man and drink his blood, you have no life within you.” All said they would go to Mass tomorrow (Sunday).

We also spoke with a couple of young families. The husband was Catholic by the wife was Protestant. Terry and I spoke to the wives for quite a while and told them that Jesus started just one church, and that it was called Catholic. We know this because Ignatius of Antioch wrote in 107 AD – and he was taught by St. John the Apostle, that, “Where the Bishop is, there is Jesus Christ and there is the Catholic Church.” They took a 10 reasons page and both said they would look at the Coming Home Network website and on YouTube look up the Veil Removed movie, and would most likely end up being Catholic.