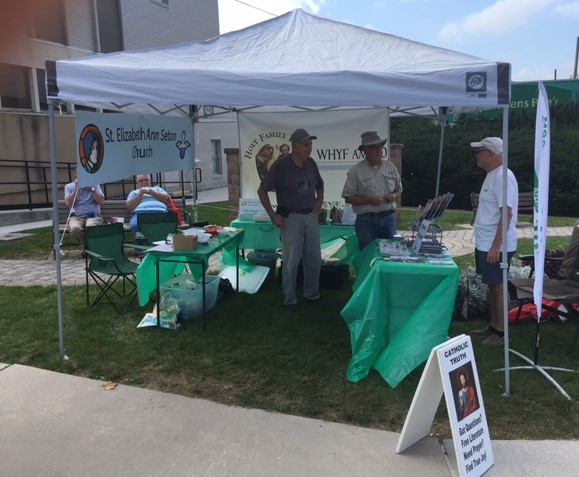 Praise God for the opportunity to evangelize alongside our friends at WHYF (Holy Family Radio) 720am this last Friday and Saturday. We had a total of about ten people (including two fellow deacons) who assisted in manning the booth at the Dillsburg Farmers Fair. Although our time was cut short by bad weather on Sat. afternoon, we were able to meet, pray with and evangelize well over a 100 fairgoers in the street or in the booth in this mainly Protestant/secular area.
A few of the many encounters:

– Numerous teenagers were intrigued by the Crucifixes, Holy Medals/Cards and Rosaries, and the explanations of their purpose. One group of boys especially appreciated the example of the saints and how they can be one’s advocate. After I discerned that St. Teresa of Calcutta (and her work among the poorest) would be a great saint for a certain teen in a group, the young lady visibly teared up and readily accepted the medal, card and was open for personal prayer for God’s calling on her life.

– A 6 yr old boy at our children’s table “randomly” drew from our token bowl a (patron saint of music) St Cecilia chip. This stunned his mother, as the boy is fascinated by music, as evidenced by the balloon toy guitar he was carrying. We all joined in prayer with mom for his future vocation, asking the saint for her prayer as well.

– A woman who was a Catholic convert but had stepped away from the Church because of the “luke-warmness” of her former (out-of-town) parish to attend an “on-fire” Protestant church, was thrilled to meet “on-fire” “spirit-filled” Catholics who loved Jesus. We gave her information on our parish and she agreed to visit our Charismatic Prayer Group.

– Explained our faith to a large group of interested children, along with a couple of moms, while giving away religious toy items, tracts and sacramentals. I was told that the father of one of the families was the head pastor of the largest Protestant Church on the west shore of Harrisburg, but the group was most grateful for the gifts, the Catholic insight given and learning about the history of the Church.
All in all, the street fair was a great place to share the Gospel of Jesus Chist and invite many to the local parishes.