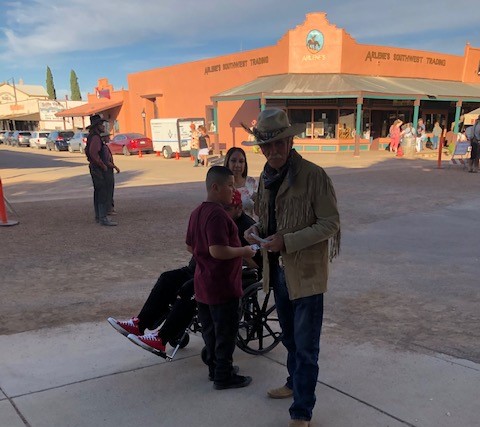 The day started out with prayer, confession and Mass, then to lead a public Rosary for America Needs Fatima where we joined with 20,000 other Public Rosaries across the nation. Then we went to Tombstone for their Helldorado Days event. The city was packed with people.

We were prepared. We brought 140 Rosaries, 150 Miraculous Medals and many brochures and other Medals. We gave out all the Rosaries with How to Pray the Rosary and the 15 promises from Mary for those who pray it daily. We gave out all 150 Miraculous Medals and gave out many “Why Be Catholic” brochures. I met with a young family where the husband was Catholic and the wife was not. I asked them if it was difficult being unequally yoked, him being Catholic and she being Lutheran. They said it was hard. I gave her Why be Catholic, and 10 Reasons why the Church was started by Christ. She also took a Miraculous Medal and I explained how Luther started his church in 1517 and the Catholic Church was started on Pentecost Sunday in 33 AD. She said she is going to give a hard look at becoming Catholic now.

Robert spoke with a man from California who said he was a Buddhist. Robert spoke with him for over an hour and explained to him that Jesus (Roberts still thinks he’s God), said unless you eat his flesh and drink his blood you have no life within you. He also explained that Jesus started just one Church. One lady came by and said to us, “I do not belong to any religion but I LOVE the Latin Mass!! I have been watching Michael Matt on Remnant TV and have to watch Latin Mass on Youtube because there are no Latin Masses close by.” We explained that the Mass is for Catholics. We gave her many brochures and she said she’d read them all. When Ed gave her a Miraculous Medal, she screamed and said “I know what that is!” She put it on immediately and gave me a big hug! We handed out many “Why be Catholic” brochures and most loved them