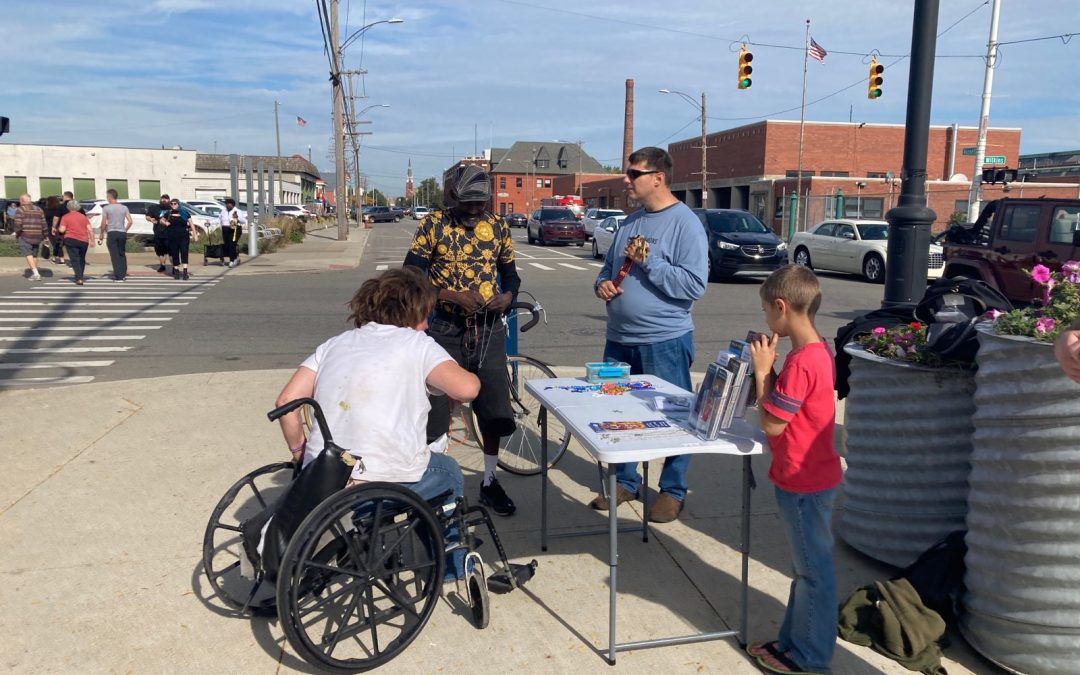 Mark, Michael and Steve returned to Eastern Market on a sunny but breezy Saturday morning.

An elderly woman, Natalia, was walking down the sidewalk and paused in front of our table. Mark offered her a rosary but she didn’t respond. Mark offered to pray for Natalia then she approached the table. She began to cry and asked us to pray for her son who is struggling with many addictions. Michael led a prayer for her son, asking that God would break the addictions, Natalia began to cry. We tried to console Natalia and she began to share her Orthodox faith and its similarities compared to Catholicism. Mark emphasized the importance of the sacraments and apostolic succession. Natalia accepted a rosary, several pamphlets, and a Miraculous Medal.

Michael offered a rosary to Wendy as she passed by us. She paused, looked at our table, silently looked at us and smiled. Mark then noticed that Wendy was already wearing a Miraculous Medal and crucifix around her neck. Mark asked if Wendy had any prayer intentions and she asked us to pray for her son — his wedding is in a couple of weeks. Mark led a prayer that the couple would be prepared for the sacrament of Holy Matrimony and have a holy marriage. Mark prayed for Wendy’s health, that she would live to see her grandchildren and would eventually enter Heaven. Wendy thanked us immensely and left a $20 bill on our table. We declined the donation but she insisted and walked away. Michael took the money and divided it among the poor.

We prayed with Shannon a few months ago. She was passing by when she recognized us and approached our table again. Shannon talked about how she is taking her faith more seriously and has returned to her Presbyterian church. Shannon and Steve had a lengthy conversation about apostolic succession and the necessity of the sacraments. Steve said that Christ established only one church, the Catholic Church. While it is good for her to go to a church, it would certainly be best for her to go to the one true church. Shannon didn’t object and accepted a green scapular, several pamphlets, medals, as well as Steve’s contact info.