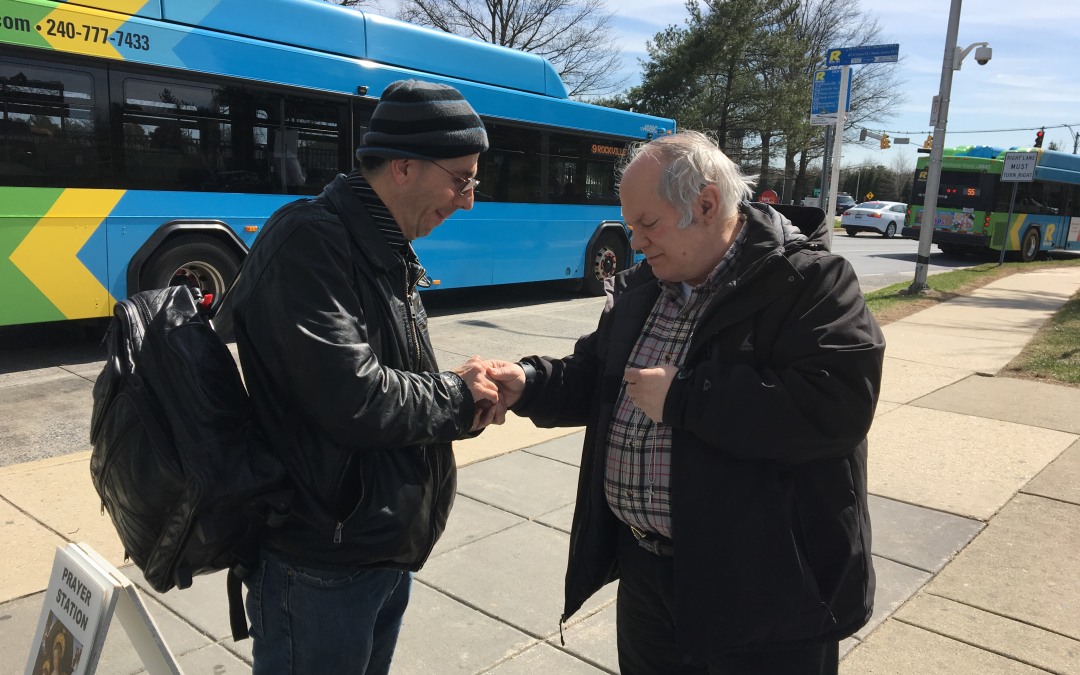 Bob and I ventured out last Saturday on a beautiful Fall day at the metro bus stop. There are many homeless people there, and we have befriended many of them over the years. One man in particular I have been praying for is Wade. About two months ago I approached him when he was sober and just felt God never intended him to be living this way. I had a wonderful conversation with him. I asked him if he believed in Jesus and he had a big smile on his face and he said yes. I asked him if he would like to commit his life to the Sacred Heart of Jesus and he said yes! We both said the prayer out loud after he repeated it after me and I asked him if he would like to renounce the spirit of alcoholism and the desire to drink in the Name of Jesus, and he said yes which he did. We both left each other and I kept on praying. I saw him a couple of weeks later and he seemed to be doing better. To my surprise, right when Bob and I were setting up the table, Wade came with a big smile on his face and he said that he had gotten a job and that he is to start next week! I was so taken by surprise and I asked him if Jesus healed him and he said with an enthusiastic manner, yes! I was so thankful to God for hearing our prayers and I pray that God continues to bless Wade and bring him into the fullness of His plan for him.

We also talked to Tyler, Nollis and Dominic, three high-school age boys. They were shocked to know that God never created us to die, but by the envy of the devil, the whole world has been deceived and been in slavery for the fear of death. We told them of the good news of the gospel and they were very eager to know more and to receive information. Please pray that God would draw them to Himself and bring them to the fullness of the truth. Doug and I went out to the bus stop yesterday. Please also pray for two young men, Bill and Raoul who both don’t believe in hell and were not really ready to accept the good news pamphlet, that God would open up their eyes to the truth.

Praised be Jesus Christ! May St. Michael, Gabriel and Raphael continue to protect this chapter and Our Lady guide them.