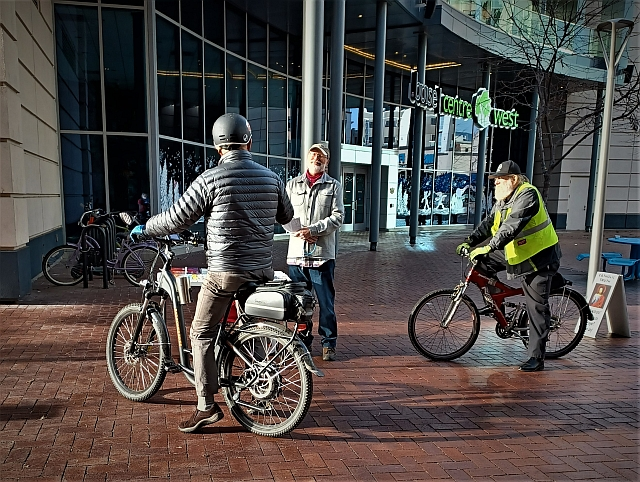 A 40-something couple declined our offer and it seemed they would keep walking by, but then the man paused long enough to say, “I don’t need anything like that.” We replied that the Rosary was a deep meditation into the life of Christ, and that brought him closer to the table. He still declined a Rosary but wanted the how-to pamphlet. Then he asked what we “hoped to accomplish” by giving out Rosaries. We explained we hoped to draw people into a deeper love relationship with Christ, His Church, and their neighbors through prayer and conversation. He said he attended a non-Catholic Christian church in a neighboring city, then he asked about the other pamphlets on the table. We offered him any he wanted but after looking over the titles he declined and went on his way. Open his heart to Your Mother’s love, Lord.

An older couple on bicycles passed. The man was in the lead and gruffly said he wanted “nothing to do with that stuff” but, as his wife passed by, she said she already had a couple of Rosaries. We said a short prayer for her. Later, the man returned to tell us that Rosaries were useless, and that he identified as a non-Catholic reformation-era Christian. Chuck replied that he had converted from that denomination five years ago, but the man identified Catholicism solely with scandals of recent decades. Chuck challenged the facticity of his statements, but the man just repeated his accusations and rode away. Lord, fill our hearts with forgiveness and love for our neighbors.

Also, another thank you for your prayers for “Myron”, the hospitalized coworker of “John-the-parking-lot-attendant”. John reports that last week he was trying to sing along with Christmas songs, perhaps tunelessly, but still another step forwards! When Myron is more alert, John plans to shock him with, “Catholics have been praying for you!”