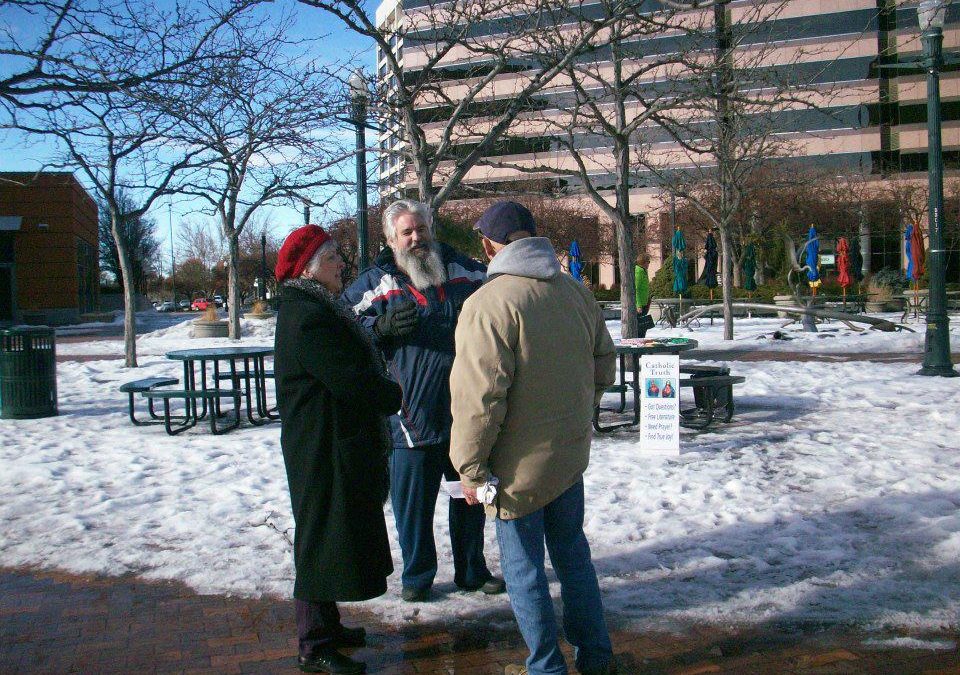 Human beings form a mixed lot, but God loves every single one of us and wants us each saved. So we try to nudge whomever we encounter closer toward Him. A woman, all smiles, came to the table and, in broken English, thanked us for being there. A Catholic from a country far to the south of here, she was in town to visit family. She remarked that we were the first Christians she had seen professing their faith out in public in America, and she’s been here five months. In her country, she said, you see many Christians out evangelizing on the streets. She chose a Rosary and received a Rosary booklet in Spanish. Lord, fill American Catholics with the fire of Faith, that they may point others to You.

A man passing by accepted a Rosary. A non-Catholic Christian, he listened with interest to the explanation of the devotion as being Christ-centered. He also really appreciated the Bible citations for each Mystery. (Chuck also recalls a second, almost identical encounter with another non-Catholic Christian man during the session.)

Later, a man passing by declined a Rosary somewhat angrily. The following man might have seen that, for he came and politely accepted one, perhaps out of polite charity. He seemed uninterested, though, in the Rosary’s spiritual aspects. May God bless him for his charity and lead him home to You!

People occasionally make remarks as they walk by without stopping: One woman going by declined a Rosary because she said she worshiped other gods. Another woman declined because she “wouldn’t use it.” Two young men (in their late teens or early 20s) passed by. One of them cried out, “God is dead. Long live [unclear—a cartoon character perhaps?].” But to answer his claim: Yes, God died (to save us). But He didn’t stay dead. He rose again on the third day and is alive today! Please pray for the conversion of these people for the sake of their everlasting souls.