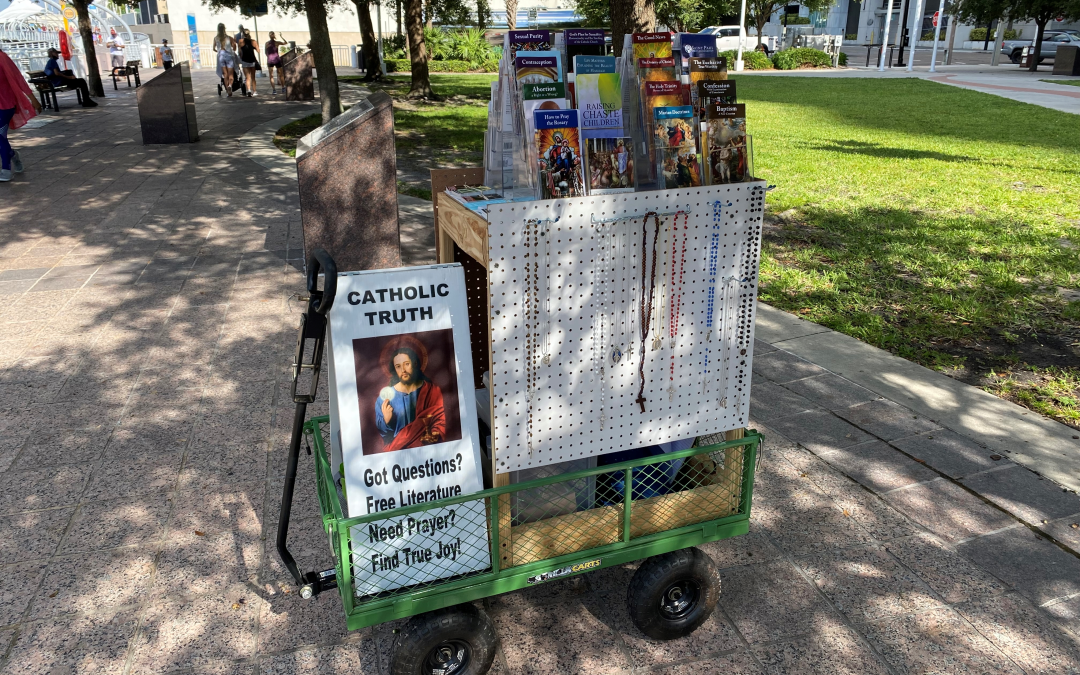 Since the only semi-valid complaint the Park people had against us was the setting up of a table, we switched to the wagon (or METU–Mobile Evangelical Tactical Unit) for our outing at the Riverwalk. Once again, the weather was beautiful, and we had a lot of foot traffic. Thanks to Reuben and Mike for joining me.

An adult son was walking his elderly father, so I offered rosaries. They said “no thanks” but about 50 feet later, turned around and came back saying, “We changed our mind, my father would like a rosary.” We get that all the time. As we entered into conversation, I found out that dad had been married at Sacred Heart (nearby church in downtown Tampa) in 1964. His wife had long since passed, and I could see how tenderly his son cared for him. About an hour later they returned, and the son sheepishly asked for a “How To” brochure. I added the Rosary CD which would help his father even more.

A Protestant father, named Kelly, and his son, Jackson (about 6) stopped by and asked me what the rosary was. After explaining that we meditate on the life of Jesus, each bead was a prayer, and dissecting the “Hail Mary”, dad said to his son, “We can do this!” So, they took their rosary and “How To” brochure and left happy.

Suzanne asked for prayers for the conversion of her daughter-in-law because she viewed that as the best way to get her son back involved with the Church. One request was a little unusual, Camilla & Gerald asked for the repose of their soul. They were (are) still alive, but I guess they were looking forward to the future.