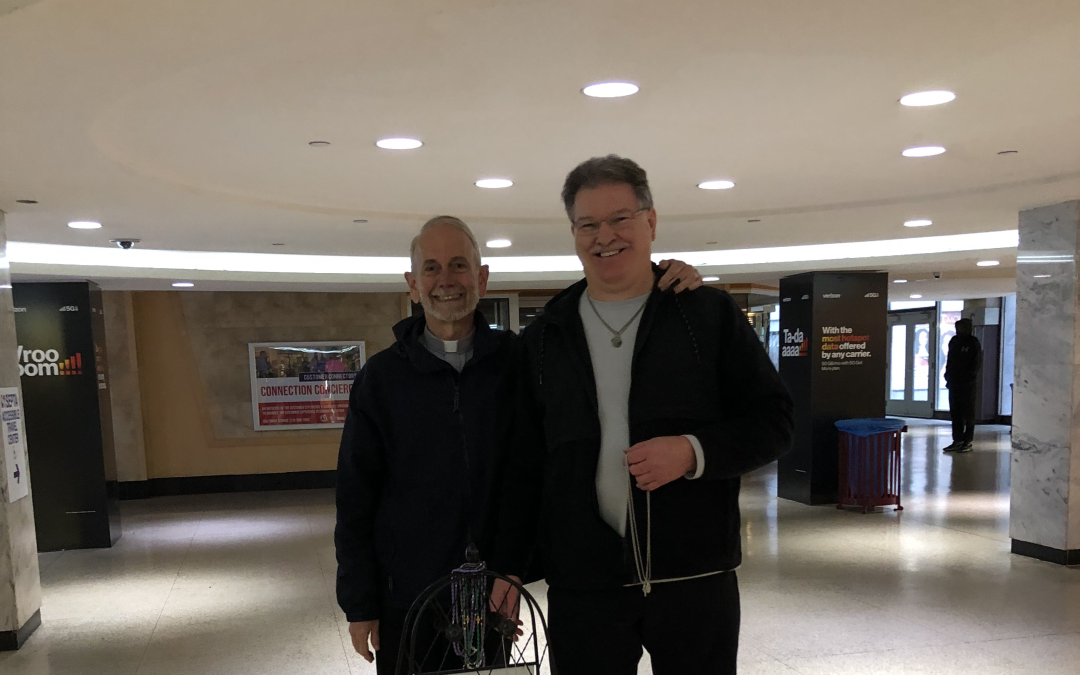 Deacon Mark, Don, and Nancy went to Suburban Station in Philly on Saturday, the day before Palm Sunday. This was Don’s first time back in the city for evangelization since the pandemic and he agreed how eerily empty the streets and the station seemed, compared to before. Walking through the station to go to our usual spot, we saw a worker in the station, Eric, who we met before and who had joyfully accepted a blessed medal with a crucifix for himself and his wife Monet. Nancy had spoken on the phone with Eric’s wife, the last time, as he wanted to share the news of his joy in meeting us and praying with us and having a gift to bring to his wife. Eric seemed pleased to remember us and for us to remember him.

We set up in the station and gave out many blessed medals and spoke to many passersby. It was a more difficult mission this morning due to a needy young man named Mikhail who was not well. He stopped to talk with us and it became clear early on that he either was schizophrenic or high or both. We offered him a juice and a cereal bar or clementine and he asked us if we were trying to kill him. Carrying on a conversation with Mikhail was nearly impossible because anything that was spoken seemed to bring his mind off in many directions. The team tried to help calm him by speaking of peace and loving thoughts and of God’s love but Mikhail would take anything said to a strange and frequently bad place, with topics of pop stars, Pope Francis, racist remarks, recollections from his Catholic education, and choice obscenities filling his mind and words. For two hours he stayed in our vicinity, getting loud at times and quieting a little at times, but constantly agitated and talking. The poor man was in a world of his bad thoughts. Our team did the best we could to carry on, speaking with others and praying with them, all the while praying and hoping to God for a healing for Mikhail.

The team, now having been to the train station a few times this year, met and prayed again with Ebony, Miracle, and Rosa. All were happy to be remembered and to remember us. What a blessing!