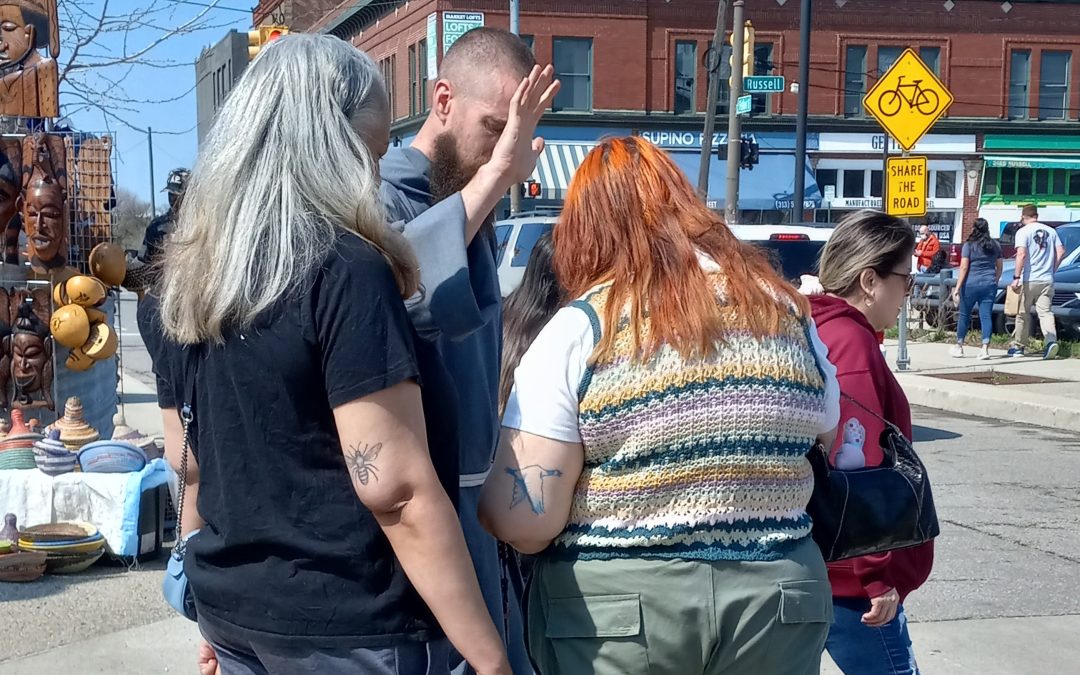 Br. Andre, Steve, and Mark returned to the farmer’s market on a warm and sunny Saturday. We thought about setting up a table at one of the busiest corners but Steve wanted to check in with a vendor that he talked to a couple of weeks ago. We walked through the entire market trying to find one particular vendor and never found him but we did speak to a dozen other people along the way.

Not far down the road, Steve approached Damon, a police officer standing alone. Steve started the conversation talking about mundane things but soon changed the subject to faith. Damon and his family moved around the region a lot when he was young so they were always changing churches; he went to several churches as a child, including at least four Catholic parishes. Damon went to a Catholic high school but didn’t like it so he transferred to a public high school. He said that he’s Christian and goes to church on occasion but doesn’t have a home church. We gave Damon a Miraculous Medal, saying that it would give him many graces from God. Mark gave him two pamphlets, “Why Be Catholic” and “Reasons to Return”. We then prayed over Damon, asking God to protect him every day, and restore broken relationships. Steve gave his business card to Damon and offered to have a longer conversation with him. Damon gladly accepted and said that he would call Steve on Monday night. We look forward to talking to Damon again!

We ran into Norma, whom we talked to a few weeks ago. She was there with Kate, her thirty-something daughter. Br. Andre talked to Norma while Mark talked to Kate. The mother-daughter pair rarely receives the sacraments but they pray often and are active with the Daughters of Isabella, a Catholic women’s group. Kate still identifies as Christian though she hasn’t been to church in a few years. While Kate says that she prays at home, she didn’t see the benefit of in-person worship. Mark talked about the importance of face-to-face interaction and the irreplaceable value of the sacraments. Kate often visits her mother, and rightfully so. She was there at the market to collect signatures for a ballot proposal. She agreed that some things are best done in person and some things cannot be done virtually. Why not worship in person with a group if you do so many other activities in person? Mark continued and said Jesus often prayed alone in nature, so it’s great to pray at home. However, Jesus also prayed and worshipped in synagogues and at the temple. It’s not an either/or choice, it’s both. We need to pray privately at home and worship as a community at church.